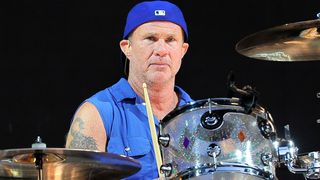 The stunt is part of an upcoming photo shoot with Rhythm Magazine and shows the sticksman playing a snare drum beside a human statue, before he gets behind the kit for a performance with a flamenco guitarist.

He later posted a picture on Facebook showing him surrounded by dozens of pigeons in the city.

The band released their latest album The Getaway earlier this month. Bassist Flea also recently revealed he thought his playing days were over when he broke his arm in five places while snowboarding with Metallica’s Lars Ulrich.

Red Hot Chili Peppers are currently on tour in Europe.