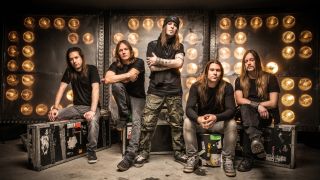 Children Of Bodom are back in the studio, the band have confirmed.

They released a photo of sticksman Jaska Raatikainen working on material that will feature on the follow-up to 2013’s Halo Of Blood.

The group say: “Drum recordings for the new album have started! Stay tuned for studio updates.”

Last year the band were left frustrated when their planned US tour with Machine Head was cancelled. They were due to support the American outfit who pulled the plug on the run of live dates to concentrate of completing their Bloodstone & Diamonds album.

Children Of Bodom frontman Alexi Laiho said at the time: “Shit fuckin’ happens, life goes on, and at least now we have an extra month and a half to write new COB shit. So instead of focusing on the negative, I’m gonna start to write music and it will be some angry shit.”

The fallout between the bands deepened when Machine Head mainman Robb Flynn slammed Laiho and the group’s fans for their reaction to the tour call-off.