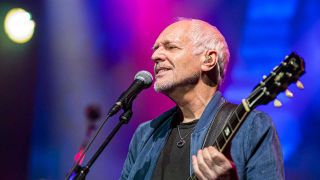 Peter Frampton has finished his final ever tour. The former Herd and Humble Pie guitarist finished up his Finale: The Farewell Tour run of dates at the 12,500-capacity Concord Pavilion in Concord, California on Saturday.

The guitarist's 16-song set included the classic solo hits Show Me The Way and Baby, I Love Your Way, as well as a raft of cover versions including Soundgarden's Black Hole Sun.

Frampton encored with three songs: covers of Ida Cox's Four Day Creep and Ray Charles' I Don't Need No Doctor, before finishing up with The Beatles' While My Guitar Gently Weeps. Full set details below.

In March, Frampton revealed that he had been diagnosed with the degenerative muscle disease Inclusion-Body Myositis, telling Rolling Stone, "In a year’s time, I might not be able to play. Right now, it’s progressing but I’m still at the top of my game.

“I know that this tour, I will be able to do everything I did last year and the year before. That’s the most important thing to me. I want to go out screaming as opposed to, ‘He can’t play any more.’ I’m not going to do that. I’m a perfectionist and I can’t do that.”

Baby (Somethin's Happening)
Lying
Lines on My Face
Show Me the Way
The Lodger
Georgia (On My Mind) (Hoagy Carmichael and His Orchestra cover)
Me and My Guitar (Freddie King cover)
Same Old Blues (Freddie King cover)
Breaking All the Rules
Black Hole Sun (Soundgarden cover)
(I'll Give You) Money
Baby, I Love Your Way
Do You Feel Like We Do