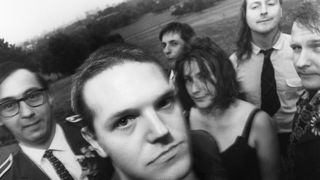 Tim Smith, enigmatic frontman of the Cardiacs, has died aged 59.

Broadcaster and former Prog Awards host Matthew Wright said, "Just been told Tim Smith of Cardiacs fame is no longer with us. He’s singing to god in person I guess. My deepest condolences to his loved ones, his many friends and countless fans. A sad day for music".

Musician and prog writer Rhodri Marsden tweeted "Incredibly sad to hear about the passing of Cardiacs' Tim Smith. A unique musical mind, a wonderful man. What a shit day. But he'll always be the dazzling light at the centre of a huge musical family."

Smith formed Cardiacs in 1977 with his brother Jim (bass), Michael Pugh (vocals) and Peter Tagg on drums. The band's sound mixed the energy of punk rock with the complexity of progressive rock, leading to the dubbing of the band as "pronk".

The band released a single and cassette as Cardiac Arrest before shortening the their name to Cardiacs and releasing the Toy World cassette in 1981, by which time Sarah Cutts (later Sarah Smith) had joined on saxophone and keyboards.

Keyboard player Willian D. Drake joined the band for 1983's The Seaside cassette, and in 1987 the band released The Big Ship album on their own The Alphabet Business Concern label, on which they'd release all future albums.

At later points in the band's career they featured bass player Jon Poole – now with Lifesigns – and guitarist and vocalist Kavus Torabi, now mainman of Knifeworld and Gong.

In 2008 Smith suffered a heart attack during which he suffered a lack of oxygen to the brain, causing brain damage. He then developed the neurological condition dystonia, which curtailed work on future Cardiacs and other musical projects.

He had made significant progress with recovery to be able to oversee the completion of a second Sea Nymphs album, On The Dry Land, with Sarah Smith and William D. Drake in 2016.

More recently an appeal was launched on the Just Giving crowdfunding website to try and raise £40,000 to fund Smith's ongoing recovery. The target was reached in one day.

Musicians have been paying tribute to Smith on social media. Kavus Torabi tweeted "See you later, right?" while former Oceansize frontman Mike Vennart posted a photo of himself with Smith saying "I'll never forget you and what you gave to me".

The Organ fanzine, who released several Cardiacs EPs in their own label simply said "ORGAN: R.I.P Tim Smith, he of Cardiacs, the leader of the starry skies…".

No further information about the passing of Smith has been made available.