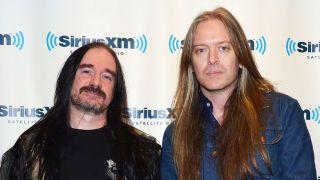 Carcass frontman Jeff Walker has suggested many bands in today’s metal scene are driven by money and not by creativity.

And he tells newer groups not to expect to make it in a crowded genre – especially when classic acts haven’t yet retired.

He tells Rock Overdose: “I think if you’re going to play music, your reason for doing that should be solely that you want to be creative and enjoy it. You should be realistic. We never formed this band to get rich, famous or big. You should have very humble goals.

“Too many people are creating bands as a career choice. ‘Should I be a football player? Should I be an actor?’ Everyone wants to be famous but I think your motives have to be pure.”

He continues: “The reality is that the older bands are not going anywhere – they still exist. It’s like a club and there’s more and more people joining but no one’s leaving. The old guard is still there, Priest, Maiden. More and more people are trying to get a foot in the door and until some bands die off, figuratively speaking or literally, the originators are still around. Even the musicians that are in Led Zeppelin are still playing.

“Once in a while, you’re going to hear some killer new stuff but it’s getting rarer and rarer. I think people’s motivations for wanting to do this are not purely artistic.”