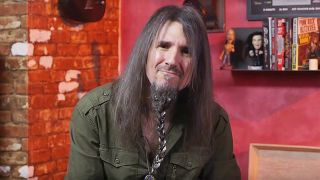 Ron ‘Bumblefoot’ Thal has discussed some of the unhappiness surrounding his departure from Guns N’ Roses, saying: “It’s not like we quit pretty.”

He struggled with the decision to leave in 2014 – a move that was never officially confirmed – but ended up realising Axl Rose’s band would never be the project he wanted it to be.

And he’s repeated that he made his choice while being fully aware that classic-era members Slash and Duff McKagan were going to rejoin the band.

Since then, Bumblefoot has worked on his solo career and with supergroups Art Of Anarchy and Sons Of Apollo.

He tells WRIF (via Blabbermouth): “I need to be super-creative. I’m not the kind of utility that you hire and he plays and gets paid, and that’s it.

“It has to grow. After eight years in Guns I looked at it and said, ‘Am I doing what I want to do?’ I felt like anyone could have doing what I was doing at that point, and it didn’t have to be me.

Bumblefoot says he “was a headcase” while he struggled with the decision, adding: “I cared so much. I cared too much about it, and I wanted it to be something that I knew it wasn’t ever going to be.”

As a result, he doesn’t think he’ll ever go and see the current lineup perform. “I always describe it like going to your ex-girlfriend’s wedding,” he says. “I don’t mean any disrespect and I do wish them well, and I’m happy they’re doing do good.

“But for me to go and see it would just stir up a lot of stuff. I’m doing my thing, they’re doing their thing and everybody just wishes each other well from afar. I’m real happy for them – they’re on top of the world right now, so good for them.”

Guns N’ Roses’ Not In This Lifetime tour continues with dates across North America until the end of November – full list below.

Ron 'Bumblefoot' Thal on his love of all things prog

Guns N’ Roses 2017 Not In This Lifetime tour dates

Guns n’ Roses taught Metallica what NOT to do - Jason Newsted