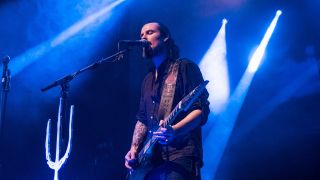 The British government has come under fire after unveiling an immigration crackdown that could affect overseas bands touring the UK.

Planned changes will mean that anyone from the EU planning to perform in the UK will need to apply for a £244 visa for every member, prove that they have £1000 in savings and provide a “certificate of sponsorship” from an event organiser.

“The Home Office has failed to grasp that touring and the creative industries are not about immigration, but a global industry in which people move around all the time,” says Deborah Annetts, the Society’s chief executive.

“This will cut the legs off the bottom half of the music industry. And what is going to happen to our small venues who have to go through this process to bring artists across from the EU?

“[£1000 savings] is fine if you’re Bruce Springsteen, but not if you’re a small rock band from Scandinavia trying to make it by playing in a few North London pubs.”

European rock and metal bands have responded to the government's plans in different ways.

Asked if the changes will make them reconsider touring the UK, Timo Rotten of German prog-metal band Oceans said: “Unfortunately yes. We’re planning a tour at the moment and actually had plans to do a UK weekend. With those additional costs it probably won’t happen. It just doesn’t make sense to spend £1000 on visas just to play two shows. We simply can’t afford it. So our UK fans have to wait for a bigger opportunity for us to come over I’m afraid. Which sucks to be honest, but let’s see what we can do about it! Where’s a will there’s always a way.”

Jan-Ole Lamberti of German death metallers Nailed To Obscurity adds: “I think we will be forced to reconsider it case by case. We don’t know how promoters will react. Will they pay higher fees to make sure all the tours will still go through the UK? Is it worth the investment in the specific case? Or is the overall income of a tour big enough that we can afford to lose money in the UK? Questions like that we will have to ask ourselves over and over again.

Other bands said the changes are unlikely to affect them.

“No, the UK is important and even though it is a bummer having to add a line to the already massive list of touring costs, this will not change any of our plans,” says Nicolas Delestrade of French metalcore outfit Novelists.

Hanno Klänhardt of Hamburg sludge metal band Mantar says that Brexit has added an extra layer of complication organising tours, though it won’t stop his band touring the UK.

“All the great people we have met in the UK should not suffer and miss out on touring bands just because of some idiot politics,” he says.