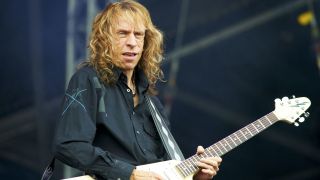 The guitarist and founder of the pioneering metal outfit says his love of punk rock fuelled the band’s DIY attitude – and taught him that you don’t have to play “like Ritchie Blackmore” to be a rockstar.

When asked how Diamond Head influenced the NWOBHM movement, Tatler tells Loudwire: “I suppose we took things further in a speed way. I always said that I really liked punk rock.

“I was 17 when punk exploded in the UK. It was very aggressive and raw. It was very fast, and it sort of left behind a lot of the prog bands of the 70s. I picked up on that.”

Tatler says it was listening to John Peel’s radio show in the 70s that made him want to become a musician.

He adds: “It made me think you haven’t got to spend 15 years in your bedroom learning to play the guitar to the standard of someone like Richie Blackmore.

“I thought, well, here you’ve got someone like Steve Jones from the Sex Pistols who is on television playing three chords. I though, ‘I can do that.’ It gave me a big kick to kind of get out there and do it for ourselves.

“I suppose in a way I think I must have – well, not just me, but the new wave British heavy metal bands – combined some of the influences of the great bands of the 70s and mixed it in with this DIY punk attitude – where you make your own record, promote your own gig and kind of blend it until it’s something new. It’s almost like you’ve invented a new style.”

Diamond Head are currently touring in support of their latest self-titled album – including an appearance at Bloodstock Festival.

It's Prog Jim, But Not As We Know It: Diamond Head