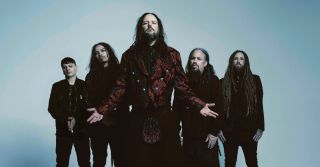 Brian ‘Head’ Welch says Korn could revisit their covers project that has been touted for some time.

Bassist Fieldy spoke about the idea last year, saying it would be called Korn Kovers, but there’s been nothing since.

But in the new issue of Metal Hammer magazine, which is on sale now, Head was asked by a fan if the project will ever be released.

The guitarist replies: “We have five or six done, and Jonathan Davis was really hyped on the idea of doing unique covers – just something fun.

“So we need to get back into that frame of mind. With this time off, that maybe could be a good idea – something to do while we’re at home.”

Speaking with The Art And Span Show last summer, Fieldy said: “I like the idea of being able to buy a CD with just Korn covers, so it's not like you're trying to make your band blow up off the back of a cover.

“But you never know how that works, because we did do Pink Floyd’s Another Brick In The Wall, and that song turned out amazing. But we don't play it that much. I wish we would, because there's nothing but good feedback.”

Lamb Of God are the cover stars of the new issue of Metal Hammer magazine, which also features the 50 Greatest Metal Bands Ever, Ronnie James Dio, Ice-T and much more.