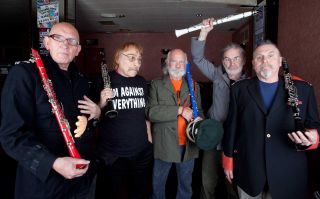 The 60s pranksters, who had a hit with the 1968 Paul McCartney-produced single I’m The Urban Spaceman, discovered two years ago that an unnamed “entity” had registered their name as a “figurative trademark.”

UK law allows anyone to register a band’s name or intellectual property for just £200 online, irrespective of whether they are involved or not. The band themselves have been unable to perform or record as The Bonzo Dog Doo-Dah Band for the last two years.

“This is an issue critical to every performing artist in the country,” say the band in a statement. “Whatever you can give will be put towards ensuring that these National Treasures are able to retain the name that they believe is rightfully theirs, as well as amending the arcane legislation which is currently ripe for exploitation and causing widespread harm and expense to the artistic community in the UK.”

Donate to the Save The Bonzos fund.