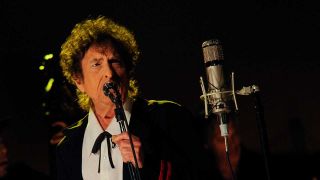 Bob Dylan has announced a new album, Rough And Rowdy Ways. It's the singer's first album of original material since 2012's Tempest.

Dylan has also released the third track to be taken from the album, False Prophet. It follows in the footsteps of the 17-minute Murder Most Foul, which was announced in late March, and the acoustic ballad I Contain Multitudes, which surfaced last month.

False Prophet both rocks and rolls more than the previous two singles, with Dylan singing, “I ain’t no false prophet,” over a scuzzy, lazy blues riff. “I just know what I know.”

Rough And Rowdy Ways is due on June 19, and will be released on double-CD, double vinyl and digital formats.

Earlier this year, the first details about a new Dylan biopic came to light. The film has the working title of Going Electric and will focus on the singer/songwriter’s controversial transition from folk to rock in the mid-60s.

Deadline reported that Dylan is involved with the project alongside Searchlight Pictures and director James Mangold, with talks with actor Timothée Chalamet about the lead role taking place.