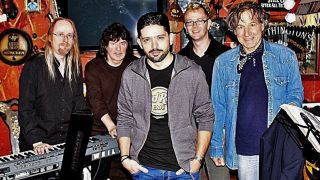 Ritchie Blackmore has revealed he nearly talked himself out of a return to rock music - until he discovered singer Ronnie Romero.

The 34-year-old will front Rainbow for a handful of shows later this year, with the chance of more to follow if Blackmore is happy with the results.

The guitarist recently unveiled a lineup featuring no former members of the band – despite vocalist Joe Lynn Turner’s assertion that he’d been working on a reunion project for some time.

Blackmore tells Aardschok: “There were moments, a few years ago, when I thought of how much fun it would be to play some of the old songs again.

“However, the longer I thought about it, the less appealing it all became. It wasn’t until I found out about Ronnie that the whole idea came back.

“He has a great voice, and his fresh input is what gave me the final push. I’m quite demanding when it comes to singers – but with Ronnie it feels good. This guy has a great future in the scene.”

He adds that his band’s set will feature 70% Rainbow tracks, including Stargazer, and 30% Deep Purple ones. “The Dio era will be a central part of the show, but we’ll also play songs from the Turner and Graham Bonnet periods,” he says. “As far as Purple is concerned, we’ll play the Gillan era, but also something from the David Coverdale period.”

He’ll return to Blackmore’s Night almost as soon as the Rainbow shows are over. But he adds: “If we enjoy ourselves and the audience gives us a positive vibe, then I won’t rule out the possibility of continuing. However, the second round of dates will probably take place in 2017.

“The crucial factor will be the chemistry between the musicians and the audience reaction. But my heart will always belong to renaissance music.”

Will Ritchie's Rainbow rise... or plummet down to Earth?