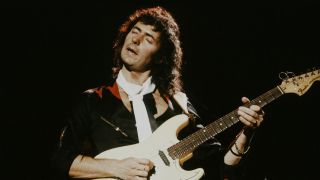 So, almost two decades after giving up rock to play alongside his wife in the semi-acoustic Blackmore’s Night, the Deep Purple and Rainbow guitar god Ritchie Blackmore is back… to plug his Stratocaster into a Marshall stack and crank it to 11 for one last hurrah.

Well, three last hurrahs – two festivals in his beloved Germany and the indoor gig at Birmingham’s Genting Arena. He says he’s “doing it for the fans”. But I’m worried.

I’m worried that next June’s shows could do to the reputation of Ritchie Blackmore what the Come Taste The Band tour did to the standing of the 1970’s version of Deep Purple. The situations are different, but the outcome could be the same. In 1976 Purple were debuting an unfamiliar line-up and all eyes were on the guitarist: Tommy Bolin, the new guy. Come next June another unfamiliar line-up will debut, and all eyes will once again be on the guitarist: Ritchie, the old guy. To be blunt…

_Blackmore will be a 71-year-old man fronting a recently formed covers band. _

Age is relative — Blackmore may well be as fit as a man half his age, and we’re all getting older — but that “recently formed covers band” bit is what worries me the most. Recreating music they’ve had no part in creating is what covers bands do, but the level of scrutiny is going to be super-intense. Ritchie has hired unknown musicians before, but he’s made mistakes along the way. The alumni list proves that. Has he really gone to the effort of finding the very best, when he knows they’re only going to play three shows?

We know that Blackmore has “a thing” about drummers and their timekeeping – but we can be certain that David Keith is not as good as Ian Paice or Cozy Powell. Ritchie has graciously and enthusiastically talked up his new singer Ronnie Romero, proclaiming him to be “very exciting” and “a cross between Dio and Freddie Mercury”, but Ronnie James Dio he most certainly isn’t.

I’ve been a Blackmore fan – well, obsessive, really – for over four decades, buying tickets to see him all over the UK and on the continent, too. And yes, I’ve bought one for Birmingham.

Working as a journalist, I met my hero several times, and treasure the memories of a beery evening with him at the Normandie Inn near his home in Long Island, recording every word he said over eight sides of four cassettes – the final one being an Englebert Humperdink Greatest Hits tape purloined from behind the bar and hurriedly made fit for purpose by the drunken application of sticky tape over the tab holes.

Thinking of that now makes me smile, but elsewhere I see Paul Elliott’s wish-list of “10 Songs We’re Begging Ritchie Blackmore To Play” next June and start to worry. It’s a good list – albeit by an optimist not old enough to have seen Rainbow – but it overlooks the fact that although Ritchie cares about his fans, perversely, he’ll do whatever the hell he wants.

I remember matter-of-factly suggesting to him that Rainbow Rising was the best album he’d made with Rainbow and he disagreed: “At that point, yeah. Stargazer was very good, but the rest of the album was extremely average.” See what I mean? You can’t second-guess Ritchie Blackmore.

I also worry that Mr Elliott, and others, will be disappointed if they expect a 50:50 mix of Purple and Rainbow. I’ll stick my neck out and predict this will primarily be a Rainbow set. Despite the poster’s line about “The classic rock anthems of Rainbow and Deep Purple” the order those bands are listed in, against the backdrop of the Rising fist, makes that clear. Ritchie has nothing to gain by going toe-to-toe with the current incarnation of Deep Purple, even though he might secretly love to wind up Ian Gillan one more time.

The Man In Black will, of course, throw a little of his Purple heritage into the mix – just as he’s always done with Rainbow. A bit of Lazy here, the Strange Kind Of Woman or Woman From Tokyo riff there, a run-though Mistreated. He may include Burn or Perfect Strangers – as he did when Doogie White was singing in 1997. And yes, he’ll do Smoke On The Water for an encore. Yet again.

But as much as I’d love him to take a long hard look at his back catalogue and recognise some classic work never performed on stage, as a fan I worry that he’ll do what he’s always done with Rainbow (and Purple before) and stick to formula: a fast opener, a rocker, another rocker, a blues, a hit or two, a long one full of solo spots, keep us waiting for the encore (perhaps indefinitely) then bugger off enigmatically… Want him to play Flight Of The Rat off In Rock? Or recreate the genius solo in Burn’s closing track, ‘A 200’? (Named after Scandinavian anti-pubic lice medication, fact fans!) No chance…

Ironically – given what so many have berated him for doing with Blackmore’s Night – he will, of course, be unable to resist the quiet bits. He’ll pick at his Strat as he always did – alternately furrowing his brow and holding a finger to his lips to make hecklers shut up and listen.

Ironically, that’s exactly what we should wish for because, in the past – in the quieter spells of Mistreated or, say, the intro to Sixteenth Century Greensleeves and Catch The Rainbow – he would raise goosebumps with with his breathtaking dexterity.

Come to think of it… I remember sitting with him in the control room at Sweet Silence Studios in Copenhagen during the recording of Straight Between The Eyes, mesmerised while he picked at an acoustic guitar. I ventured then that he should play it more often.

What any Rainbow virgins need to know is: Ritchie pretty much always ignored what his audience would have asked him to play (he very rarely did Stargazer after 1976) and simply won over more fans than he pissed off by playing guitar solos like a man possessed. Which is why I kept going back.

With apologies to anyone not old or lucky enough to have seen shows on the first two Rainbow tours, in the autumns of 1976 and 1977 in the UK, those incarnations of the band were head and shoulders above what came next. After Dio left the band, a light went out of Rainbow’s music as Ritchie searched for… something else. Albums became less important. Touring, though, kept us interested.

The gigs were different every night depending on the many things that could influence Ritchie’s mood. Those I saw were always good, sometimes out-of-this-world great. Yet you never knew what you were going to get. That unpredictability was what made Rainbow so special.

Mind you, anyone at Wembley Arena on February 29, 1980 – when the lights came up after Blackmore refused to play an encore, might disagree. They might even have joined in the mini riot of protest that even earned Rainbow column inches in the Daily Telegraph.

But, if you saw enough shows on any given tour, you got rewards in the most unexpected places: the second Manchester Apollo show on 1980’s Down To Earth tour with Graham Bonnet singing, the Leicester Granby Halls in 1981 when the band were fronted by Joe Lynn Turner… There is, though, a bit of mathematics involved. Thermo-nuclear rock’n’roll nights like those came along roughly once every four shows. And he’s only doing three, this time…

But now I’m being paranoid.

Ritchie Blackmore remains the most exciting guitarist I have ever seen and truly a one-off. Aged 71 I realise he probably won’t scale the PA or stand centre-stage spinning the remains of a recently sacrificed Strat over his head – but class is permanent and the sword of his ability, kept sheathed for most of the last two decades, is bound to still be Samurai sharp. So maybe I worry too much.

Whether he pays homage to hit single writer Russ Ballard with I Surrender and Since You’ve Been Gone, or to Beethoven by lacing Ode To Joy into a 24-minute version of Still I’m Sad played with his back to the audience it’ll still be a thrill to see him do what he’s best at. One… last… time.

The very fact he’s decided to do these shows at all means the original spirit – a heady cocktail of genius, torment and bloodymindedness – still inhabits him. And that means that if the stars align he will once more play like a demon. Maybe even like the killer-diller third night with Dio at the Finsbury Park Rainbow in 1977.

So, if you’re listening Ritchie… how about Man On The Silver Mountain, Gates Of Babylon, Eyes Of The World and a Stargazer/Light In The Black segueway? Except you’re not listening, are you?

But we’ll be there. Don’t you worry about that.