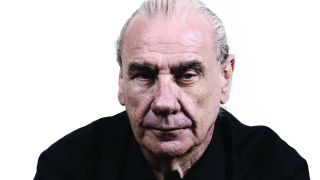 Black Sabbath didn’t approve of the inverted cross used in the artwork for their debut album, according to former drummer Bill Ward.

Ward hints it may have been used as a “promotional ploy” by their label Vertigo and says though the band were “morbid” and “rebellious,” the Satanic symbol didn’t represent who they were.

In an archive interview from 2010, which has recently surfaced, Ward tells Banger TV: “The cover was something that was presented to us, and being our usual morbid selves, we were all instantaneously attracted to that.

“But the inside cover, none of us liked. We didn’t like it at all because it had an inverted cross in it.”

He adds: “I think there were some wise guys who deliberately put that together as a ploy – as an advertising, promotional ploy, or who had seriously misgauged us as a band. There was no collaboration so I don’t know who was responsible for it. I guess someone thought it would be a good idea and thought that was what we represented.”

Calling the artwork a “bad taste call,” he adds: “Ozzy Osbourne’s father had given us these crosses – the original Sabbath crosses, there was nothing upside-down about those.

“He gave us those as he believed in a higher power, he believed that the crosses might help us on our many journeys. He was concerned about making sure we were all safe and sound.”

Ward also reflects on Sabbath’s early years, saying they had “unusual interests” such as the supernatural, horror movies and classical music – but insists that they were never Satanic.

He continues: “I saw our band as a solid, hardcore rock band that was hard, interactive with the audience. I saw us as almost punk-ish.

“Satanic rock, I think that’s prevalent today, but it wasn’t a part of Sabbath. We went and covered many topics, but in the literal sense of being Satanic? No.”

Last year, bassist Geezer Butler said their critics regularly focused on the band’s name over their lyrics, adding: “People always like to find the evil in the music, so they’d quote the ‘pope on a rope’ part out of context, as usual.

“I think if we’d been called White Sunday we’d have had a totally different reaction.”

Ward ruled out a return to Black Sabbath on the last days of their The End tour earlier this month. He was originally to appear on their record 13 but bowed out in 2012, saying he hadn’t been offered a contract he regarded as “signable.”

That led to a war of words, with the strongest exchanges between Ward and frontman Ozzy Osbourne.

They’ll wrap up The End tour in their home city of Birmingham in February.

The Dark Knights Rise: The Epic Story Of Black Sabbath In the 70s