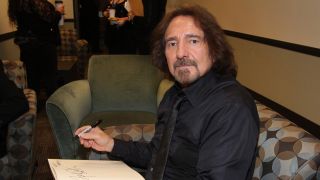 Geezer Butler believes his Black Sabbath lyrics have been misunderstood over the years because critics focused on the band’s name instead of their song words.

And he’s underlined that Christian groups have missed the point about songs like After Forever, from 1971 album Master Of Reality.

Butler, who writes most of Sabbath’s lyrics, tells The Weeklings: “People always like to find the evil in the music, so they’d quote the ‘pope on a rope’ part out of context, as usual.”

He says the song was inspired by the troubles in Northern Ireland at the time, adding: “We all believed in Jesus — and yet people were killing each other over it. To me it was just ridiculous. I thought that if God could see us killing each other in his name, he’d be disgusted.”

A similar controversy arose as a result of Sabbath’s most recent album, 13, when God Is Dead? was said by some to be an anti-religious track, when it was inspired by the concept of people destroying their own ambitions.

Butler says of his viewpoint: “We weren’t interested in writing songs about the nice things in the world – everyone else was writing about that. We wanted to inject some reality into music.”

And he reflects: “I think if we’d been called White Sunday we’d have had a totally different reaction.”

Sabbath’s future remains unclear – frontman Ozzy Osbourne has suggested a final album and tour will take place next year but Butler last month said he had “no idea” if anything would come of the plans. Meanwhile, Ozzy has been embroiled in a bitter public dispute with estranged drummer Bill Ward.