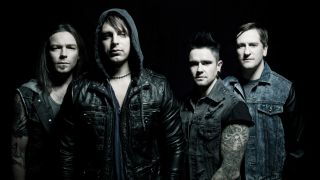 He believes they were tempted to increase their success by artificial means, which on reflection was never going to work.

And he says ex-bassist Jay James’s departure hasn’t made a difference to the band’s songwriting process, because he was never involved.

BFMV return with fifth record Venom in August, after Matt Tuck described its 2013 predecessor as “tainted before it had even begun.”

Thomas tells Courant.com: “Working with certain people and producers, if you’ve had a radio hit at one time in your career, they try and make your whole album sound like that.

“We tried to do that on the last album – and we failed miserably. So we went back to our roots and picked up where we left off.”

He continues: “On the first album we didn’t know what we were doing. We were just writing songs. With a little success you think, ‘Maybe if we tone it down a little we’ll get even more success.’

“But I don’t think that’s the case in heavy music at all. People like you for who you are – if you stay true people will like you all the more.”

Thomas reports that BFMV are enjoying life with new bassist Jamie Matthias, saying: “It’s like having a naughty little brother on tour.”

He adds of James: “God bless him, but he never really contributed anyway. It was just the three of us putting stuff together. It was business as usual.”

BFMV are featured in the current edition of Metal Hammer, on sale now in print, digital and via TeamRock+.

Bullet For My Valentine: Fang Warfare