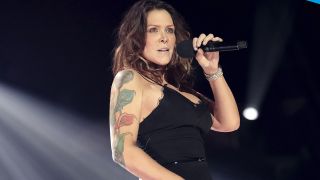 Beth Hart has announced that she’ll release a new live package next month.

It’s titled Live At The Royal Albert Hall and was recorded at the iconic London venue in May this year during Hart’s sold out performance in the city.

A statement on Live At The Royal Albert Hall reads: “Beth Hart makes one hell of an entrance. It’s May 4th, 2018, and the Royal Albert Hall is in blackout. As a sell-out crowd holds its breath in the darkness, a lone figure appears from the shadows and purrs the opening line of As Long As I Have A Song in that unmistakable burnt-honey voice.

“Taking her time, followed by the spotlight, the Grammy-nominated singer-songwriter picks her way between the aisles of this iconic London venue, delivering the languid jazz vocal entirely acapella, while shaking the outstretched hands of fans who can’t quite believe what they’re witnessing.”

To mark the announcement, a trailer for the package has been released which can be watched below.