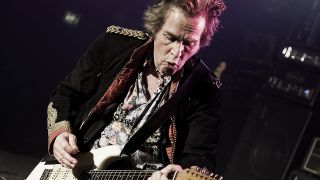 The family of Bernie Tormé have told Classic Rock that there’s been no improvement in the guitarist’s health after he was rushed to hospital suffering from virulent pneumonia in both lungs.

He was taken to hospital earlier this week, where it was reported that he was “extremely ill” – and his family now report that last night, he was placed on a ventilator.

"Your continued thoughts, prayers and best wishes are most welcome.”

Tormé released his latest studio album Shadowland in November last year, but the family report that PledgeMusic – who say they’re working on a solution to address late payments to artists – still owe the guitarist £16,000, which was due to be sent to him in December.

The family say: “Bernie has paid for all recordings, merchandise, CDs and all postage costs to send Pledge items out to his fans out of his own pocket. He has as yet been unable to pay his musicians; drummer Mik Gaffney and bass player Simon Morton for their work on the album.

“This has been a very stressful situation for Bernie, exacerbated by the lack of communication coming from Pledge and, despite their promises, no sign of coming through with any solution to clear up the mess they have created.”