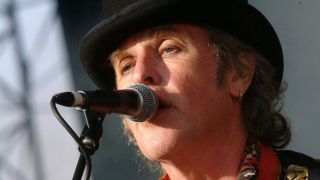 Bernie Torme has launched a crowdfunding campaign for his next solo album.

The Irish icon – known for his work with Ozzy Osbourne and Ian Gillan – issued Flowers & Dirt last year after a crowdfunding campaign which smashed its target in 24 hours.

It was his first album in 15 years and he’s moved fast to outline his plans for the follow-up.

Torme says: “I am really so delighted to be doing another album with PledgeMusic.

“Last year when I did a PledgeMusic campaign for the first time I really had no idea what was going to happen or how it would all pan out. Suffice to say it went absolutely brilliantly, lots of pledges, lots of pledgers, by the end I had received over 400% of my goal.

“Apart from being able to finance the Flowers & Dirt double album and pay all concerned properly as well as give a sizeable donation to Teenage Cancer Trust, I also had such a great time doing it, plenty of interaction with pledgers, and it was so cool for me to be hands on with some of my very best fans.”

Torme has confirmed that 10% of the money raised from his latest campaign will once again go to the Teenage Cancer Trust.

A range of packages are available through the Pledgemusic page, including a guitar body smashed on stage by Torme during a show with Ian Gillan. The campaign runs for 90 days.