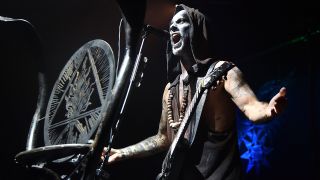 Last month, Behemoth vocalist and guitarist Adam ‘Nergal’ Darski whipped up controversy when he posted images of a “black metal against Antifa” t-shirt on Instagram.

He then moved to explain his reasons for uploading the images – and in a new interview with Kerrang, Nergal has again spoken about it.

Asked why he thought it created a reaction on social media, Nergal replies: “Honestly, I have no idea. First of all, people misinterpret things on the spot. They don’t ask questions any more.

He then points to an incident back in August where he posted a video to Instagram, which showed him claiming to have been kicked out of a YMCA gym for wearing a Darkthrone t-shirt – and admits it was a lie.

He explains: “Behemoth bassist Orion and I went, but we had to go back to another gym and I just made up the story that we were rejected because of our beliefs.

“People are being fucking outraged, people saying that I should get beaten, that my opponents would just be happy about that. I’m just reading all these comments and I’m going, ‘Why?’ No one would bother to ask me if it’s true – because it wasn’t – I made up a story.

“It was another occasion that I realised how it’s easy to manipulate people, how to fool them around and just make whatever you want to do.”

As for the images of the t-shirt, Nergal reports that it was “disgusting” that he was being accused of being sympathetic to Hitler and says opinions are black and white these days with no space for grey areas, adding: “I’m in the middle and I have my opinion: both sides are shitty.”

Nergal goes on to say: “If you follow my social media, you know that I’m pro-LGBT, I’m always pro-womens’ rights. When it comes to black metal, I’m way too liberal for how conservative this genre is.

“I understand that for some people it’s not very comfortable what I’m saying. But the last thing you should do is to accuse me of any radicalism. I love my art to be radical and extreme. This is the spot where I go. This is my place. But off stage? I’m just a liberal with a big mouth. That’s all I am.”

Behemoth are gearing up for appearances at Knotfest Mexico and Knotfest Colombia before the end of the year and will return to Europe with Slipknot in early 2020.