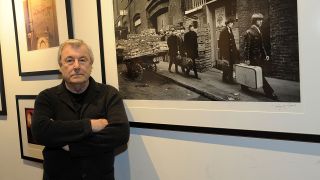 Photographer Terry O’Neill, known for his work in music and film, has died at the age of 81.

The news was confirmed by Iconic Images – the agency who represented O’Neill’s work, with reports saying he died after a battle with prostate cancer.

A statement from the agency reads: “It is with a heavy heart that Iconic Images announces the passing of Terence ‘Terry’ O’Neill, CBE.

“Terry was a class act, quick-witted and filled with charm. Anyone who was lucky enough to know or work with him can attest to his generosity and modesty.

“As one of the most iconic photographers of the last 60 years, his legendary pictures will forever remain imprinted in our memories as well as in our hearts and minds.”

Born in London in 1938, O’Neill was expected to become a priest but dreamt instead of being a jazz drummer. Thinking a job with an airline would allow him to travel to New York and experience the city’s bustling jazz scene, he sought employment with BOAC which would later morph into British Airwaves.

He was instead advised to take a job in their photography department and he would take pictures of famous faces at airport terminals, which would eventually lead to O’Neill getting a job at the Daily Sketch.

A job assignment was then passed his way that would to have a major impact on his career.

He said: “I was asked to go down to Abbey Road Studios and take a few portraits of this new band. I didn’t know how to work with a group, but because I was a musician myself and the youngest on-staff by a decade, I was always the one they’d ask.

“I took the four young lads outside for better light. That portrait ran in the papers the next day and the paper sold out. That band became the biggest band in the world – the Beatles.

O’Neill also captured portraits of other artists including the Rolling Stones, Eric Clapton, Elton John, David Bowie and Queen, and also took photographs of some of the most famous faces in the film world including Audrey Hepburn, Elizabeth Taylor, Michael Caine and Sean Connery.

Earlier this year, O’Neill was awarded a CBE (Commander Of The British Empire) for his services to photography.

He said it was “a huge honour,” adding: “I’m incredibly humbled by it. It’s a real recognition for the art of photography, as well. This isn’t just for me of course, it’s for everyone who has helped me along the way.”

Find a selection of O'Neill's images below.