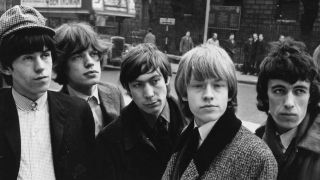 The Rolling Stones have done more than most to keep the blues alive, whether that’s playing Chess classics to hordes of oblivious teenage girls in 1964 or making the genre their own with tracks like Midnight Rambler and Stray Cat Blues at the close of that decade.

Crucially, the Stones, unlike Jimmy Page and Robert Plant, always showed their workings, ensuring that heroes like Muddy Waters, Howlin’ Wolf and BB King were given credit and exposure to new audiences at every opportunity.

No bunch of white kids from London ever had more right to play the blues.

Confessin’ The Blues was first released on The Stones’ now legendary Five by Five EP, one of a quintet of tracks recorded at Chess Studios in Chicago June ‘64. Other cuts on the EP included soul man Wilson Pickett’s If You Need Me, Chuck Berry’s Around And Around and two tracks attributed to Nanker Phelge: Empty Heart and 2120 South Michigan Avenue, the latter the address of Chess Records. Nanker Phelge was the collective songwriting credit for all five Stones.

The censors might have choked at Jagger singing how he couldn’t “make some girl” on I Can’t Get No (Satisfaction) but they missed the boat completely with Stray Cat Blues. “I can see that you’re fifteen years old…” drawls Jagger before continuing, “no, I don’t want your I.D, you look so restless and you’re so far from home, but it’s no hanging matter, it’s no capital crime.” Changed days indeed.

Running at a very ‘un-blues’ seven minutes plus, Can’t You Hear Me Knocking opens with a killer open-G guitar riff from Keef and concludes with some of his then compadre Mick Taylor’s greatest lead work. The song’s extended length was actually an accident. “We didn’t even know they were still taping,” claimed Keef later. “We thought we’d finished. We were just rambling and they kept the tape rolling.”

The balls on these spotty oiks from Dartford! I Just Want To Make Love To You was one of American blues’ golden rings, an untouchable classic written by Willue Dixon and performed by Muddy Waters. Thing is, the boys did good. Their version not only earned the respect of Waters but helped put the Chess legend’s flagging career back in business.

Such are the interpretive powers of Mick, Keef and the boys, their version of Robert Johnson’s dark Love In Vain sounds like they wrote the thing themselves. Originally cut by the “King Of The Delta Blues Singers” in 1937, the song is about the pain of unrequited love, a feeling emphasised by Jagger’s aching vocal delivery.

Originally cut as Stop Breakin’ Down Blues by the hugely influential Robert Johnson in Dallas, Texas, on June 20, 1937, this song has been covered countless times by blues icons like the first Sonny Boy Williamson, Chicago blues royalty Buddy Guy and Junior Wells, and others like The White Stripes. The Stones version is arguably the best known.

Written by Mick ‘n’ Keef, this haunting ballad, released as the b-side to Street Fighting Man sounds equal parts blues and country, like a songwriting session between Robert Johnson and Hank Williams. Using the classic lonesome train motif employed by countless delta blues artists the track was subsequently covered by The Man In Black, Johnny Cash.

No one knows who wrote You Gotta Move. A traditional Southern gospel song it was recorded by rock’n’roll guitar pioneer Sister Rosetta Tharpe and The Original Five Blind Boys Of Alabama, but it’s the 1965 version cut by Mississippi Fred McDowell that fired up The Stones.

The Stones’ cut of one of Chess Records’ songwriter/bassist/resident genius Willie Dixon’s greatest songs echoes the 1961 version by Howlin’ Wolf. The Stones’ 45 is the only blues single ever to have topped the British charts. Said Mick Jagger: “The reason we recorded Little Red Rooster isn’t because we want to bring blues to the masses. We’ve been going on and on about blues, so we thought it was about time we stopped talking and did something about it.” Here’s the band performing the song live on the Ed Sullivan Show in 1965.

Despite all the hero worship of Robert Johnson, Muddy Waters, Howlin’ Wolf and their back catalogues, the greatest blues song The Stones every recorded was one that Mick ‘n’ Keef wrote. Based on the fiendish deeds of serial killer Albert DeSalvo, aka The Boston Strangler, Midnight Rambler never sounded more sinister and dangerous than this performance at the band’s free Hyde Park in 1969. The summer of love was officially over, man.