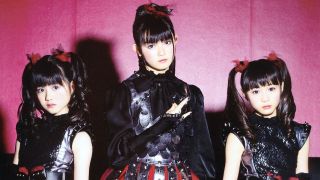 Babymetal will return to the UK next year for a show at London’s SSE Arena Wembley on April 2.

And they’ve confirmed they’ll follow appearances at Reading and Leeds this weekend with the launch of two live DVDs.

Live At Budokan: Red Night & Black Night Apocalypse will be available as a 2DVD, Blu-ray and limited-edition CD/DVD. And Live In London, shot earlier this year, will be launched in 2DVD and Blu-ray formats. Both arrive on October 30 via earMusic.

Tickets for Babymetal’s Wembley show go on sale at 10am on September 2. Meanwhile, the trio have launched a live performance of Ijime, Dame, Zettai from their Sonisphere appearance.