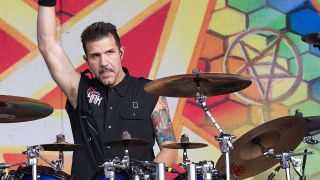 Anthrax drummer Charlie Benante says that the band’s next album will be “a little more aggressive and angrier” than their last record.

Speaking to Metal Rules, the drummer said that the New Yorkers are working on the follow up to 2016’s For All Kings.

“This album we are working on now, [the songs] are a little more aggressive and angrier only because the climate we are all living in is reflected in our music. When I come in with something, I have hopes and dreams that the song is going to be as great as I hear it in my mind. I think the other guys stepped up as well think this is really good and want to hit a home run on each song. Everybody in the band stepped up their game.”

Benante recently revealed that he has “around seven or eight ideas” for Anthrax’s 12th album.

“It’s probably going to be another goal of mine to have 20 songs to choose from, like with the last album. I just want to have as much as possible so we can say, ‘Those are great. OK, we need to work on those a little more.’ Just have a variety.”

Anthrax recently their new DVD Kings Among Scotland will hit the road with Slayer on their final tour across North America from May.