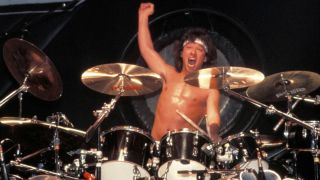 The drum intro to Van Halen classic Hot For Teacher has been voted the best of all time – ahead of work by Rush, Guns N’ Roses, Led Zeppelin and Queens Of The Stone Age.

The poll was compiled from readers of Rhythm magazine, who gave Dave Grohl three positions in the top 10, and two to John Bonham.

Rhythm say of Alex Van Halen’s start to 1983 track Hot For Teacher: “It’s arguably one of the most iconic intros in rock, and playing it is a holy grail for a lot of drummers. Alex Van Halen steps out of his guitarist brother Eddie’s shadow to shine with a blistering solo before kicking into a furious double-bass shuffle in a flurry of notes.”