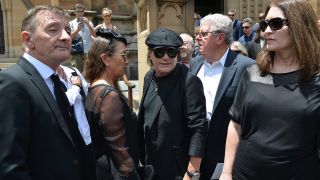 Young, who died earlier this month at the age of 64, was laid to rest following a service at the city’s St Mary’s Cathedral, with friends, family, bandmates and musicians in attendance.

Young’s 1963 Gretch guitar, nicknamed The Beast, was placed on the coffin inside the cathedral, while those in attendance were given a booklet and guitar picks inscribed with the dates of Young’s birth and death.

A statement in the booklet read: “Malcolm’s family thank you for your love, support and overwhelming outpouring of kindness during this time.

“They ask that you remember Malcolm as a man who was generous and had immense talent. His enormous legacy to his family and music industry worldwide will never be forgotten.”

Hundreds of fans gathered on the streets and following the service, the funeral cortege was led by the Scots College Pipes And Drums band, who played a medley of songs including AC/DC classic It’s A Long Way To The Top (If You Wanna Rock ’N’ Roll) and Waltzing Matilda.

The service was followed by a private family burial.