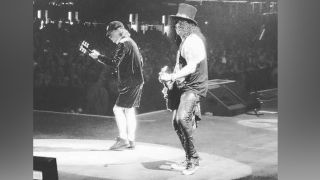 Young on stage with GN'R

He helped Axl Rose and co deliver cover versions of his band’s tracks Riff Raff and Whole Lotta Rosie – soon after singer Rose was confirmed as frontman for the last dates of AC/DC’s Rock Or Bust world tour.

The Aussie giants will perform 12 dates across Europe in May, after singer Brian Johnson was reported to have been forced to retire over hearing issues.

Guns N ‘Roses are believed to be in talks to expand their Not In This Lifetime tour outside North America, with classic-era members Slash and Duff McKagan on board for the first time since the early 1990s.

The Coachella festival broadcast a live stream of parts of GnR’s performance, including November Rain.