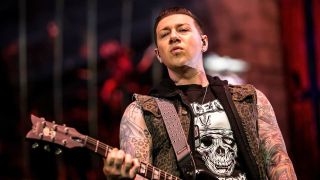 The material being written for Avenged Sevenfold’s upcoming seventh album has been described as “aggro” by guitarist Zacky Vengeance.

A7X tentatively plan to release the follow-up to 2013’s Hail To The King next year.

Vengeance tells Kerrang: “At this point, the only word that would describe it is ‘aggro.’ It goes in all sorts of aggressive directions and melodic directions. It has a lot of metal elements that we grew up loving. And tons of melody.”

The band’s new drummer Brooks Wackerman, who left his role in Bad Religion to take up the post vacated by Arin Ilejay, adds: “It’s going to be a completely different record once again. I just know that, even though it will still sound like Avenged, it’s going to be different to Hail To The King. I think there will be a little more classic Avenged in there, intertwined with some new flavours.”

A7X last month made a series of instrumental pieces they recorded for the latest Call Of Duty video game available to stream.