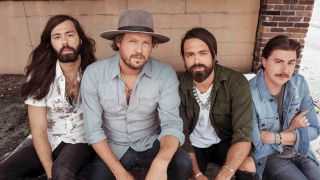 Nashville-based country rockers A Thousand Horses have released Drinking Song, the second track to be taken from the band's as-yet-untiled second album. The new single follows the release of Living My Best Life last year, a Classic Rock Track Of The Week in October.

Drinking Song was produced by multiple Grammy winner Dave Cobb at Nashville’s historic RCA Studio A. Cobb has previously worked with the likes of Rival Sons, Shooter Jennings, Europe and Whiskey Myers. The album will be released on Cobb’s Low Country Sound imprint at Elektra Records.

"Your playlist can be full of love songs, dance songs, maybe even some mariachi band songs," say the band. "But there’s one thing we know, everyone loves a drinking song!"

A Thousand Horses opened for Lynyrd Skynyrd’s on a string of dates during the band's ongoing farewell tour, and have also toured with Blackberry Smoke and Gregg Allman.

2020 tour details will be announced soon.