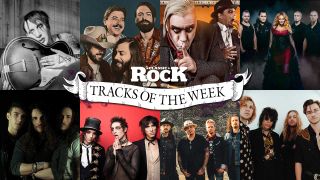 Another week begins, and we've got eight new tracks to run up rock's greasy flagpole in the hope that the world salutes

But first, here are the three songs from last week you voted into the medal positions on rock's ultimate podium.

So congratulations to Ulysses! Don't drink it all at once! And before we embark on this week's journey into the unknown (don't forget to vote), let's celebrate the magnificence of Married Woman one more time. Thank you.

The self-proclaimed God Of Fuck goes country and western on this latest track, which isn't from the upcoming album produced by Shooter "Son of Waylon" Jennings, but might be a hint of what's to come. This swerve to the dark side of Americana suits Manson, and the song - most people will be familiar with the Johnny Cash version - is a spooky, bible-black splinter of gothic oddity.

Americana of a more traditional slant now, as A Thousand Horses return with their wholesome brand of country rock. Living My Best Life finds the band working with hotshot Nashville producer Dave "Rival Sons" Cobb, while the video is a litany of delicious country cliches, stuffed with images of cold beers, pick-up trucks and denim-shorted gals shootin' pool. Literally yee-haw.

You can rely on Lindemann to sound just like the sum of their parts. In this case the parts are Rammstein singer Till Lindemann and Pain mainman Peter Tägtgren, and Ich weiß es nicht sounds like Rammstein, and it sounds like Pain. It features giant strutting riffs and cheesy Europop keyboards, which combine to sound like the sort of thing either band might have come up with between albums. Which, essentially, is what's happened.

This is one of those things that comes along and makes you wonder why it's not a thing already. What is it? It's ABBA-metal. Can we describe this unholy hybrid? We certainly can. It's like ABBA. But in a power metal stylee. Think Voulez-Vous or Gimme Giomme Gimme (A Man After Midnight), but with a symphonic slant. And there is no world in which that isn't a good idea. Your mileage will almost certainly vary.

Blackpool's A'priori have an unusual guitar/drums/keyboard configuration, but the lack of bass guitar doesn't stop them from letting loose the kind of riff that Royal Blood or Muse would donate a kidney to compose. Some lovely, fluid soloing from axeman Tony Lang, who also does the singing, which soars in a Myles Kennedy/Axl Rose fashion. Impressive, impassioned, professional stuff.

Palaye Royale - Hang On To Yourself

Is there any band in the world with better individual names than Palaye Royale? Remington Leith, Sebastian Danzig and Emerson Barrett are their names, and collectively they sound like a firm of hipster lawyers. Luckily, the music is ambitious and the video mysterious, so we forgive them, and Hang On To Yourself is some sort of glittery glam pop disco hybrid monster with a chorus bigger than a cow. 75 out of 10, possibly.

Black Stone Cherry - All Your Love

Black Stone Cherry's two EPs of blues covers look like an awful idea on paper – earnest versions of songs buried in bombast – but the reality is somewhat different as the band's enthusiasm for the source material shines through. This time the great Otis Rush gets the Cherry treatment, with some nice choogle to the guitars, some lovely keys, a guiro, and a terrific, scattish vocal from yer man Robertson.

We head live to Paris for this week's final entry, as UK glam kings The Struts hook up with French Federation Of Funck guitarist Yarol Poupaud for a 14-minute odyssey through David Bowie's Rebel Rebel. It's yet another reminder that frontman Luke Spiller somehow appears to have inherited some of Freddie Mercury's DNA, but if you're not yet convinced, skip forward to the seven-minute mark. And then think about how many other frontmen process the absolute brass balls to do what he does.