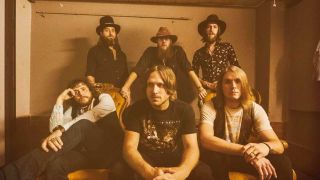 Southern rock'n'roll misfits Whiskey Myers have announced details of their fifth studio album. The self-titled released will be available from self-respecting retailers on September 27.

The band have also released the first single from the album, Die Rockin', a lively, gospel-tinged ode to living the rock'n'roll dream.

"I wrote Die Rockin' with the legendary Ray Wylie Hubbard [writer of the beer-stained classic Up Against the Wall, Redneck Mother], and it really sums up this rock ‘n’ roll life of ours,” says frontman Cody Cannon “We're consumed by music and are such fans of the legends that came before us.

"We're out there on the road and in the studio trying to pay homage to those greats that have inspired this generation while we strive to create some magic of our own."

The new album is the follow-up to 2016's Mud, described by Classic Rock as "mostly hard’n’heavy, with lashings of country and blues, and a healthy dose of R&B and rock’n’roll."

"This was the first album we've produced on our own and it's 100% authentically us, which is why we decided to self-title it Whiskey Myers,” says lead guitarist John Jeffers.

He adds, “We've been fortunate in our careers to work with some incredible producers, but self-producing gave us the freedom to try out every crazy idea in the studio, which got us to this place where we are completely satisfied with the end result and more excited than ever to get this new music out to our fans."

The album is available to pre-order now.