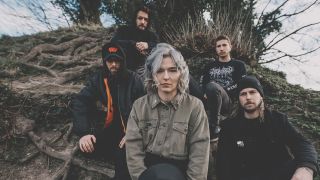 Venom Prison are well known for their incredible, energetic live shows. Since being catapulted to the forefront of the UK extreme metal scene with debut album Animus, they've toured far and wide bringing their electrifying brand of feminist death metal to fans of Trap Them,  Bloodstock punters and even US metallers.

Venom Prison are proving to be an unstoppable force, their most recent album Samsara is a twisted death metal classic, and the band are now gearing up to support Parkway Drive at Wembley Arena is Sat 18th April.

To give you a taste of just how insane these Welsh deathers' live shows are, we've got an exclusive video for you guys – a flashback to when they floored the crowds of Damnation Festival back in November 2019, playing single Uterine Industrialisation to an incredibly sweaty and jam packed room full of hardened extremists.

Vocalist Larissa Stupor comments: "We as a band connect a lot with Uterine Industrialisation. It was the first single from Samsara, I remember how excited we felt to finally being able to reveal what we had worked so tirelessly on, how much fun we had shooting the music video and recording it in the studio.

"We still feel the same excitement playing this song live. It transmits so much energy on stage, with its heavily brutal riffs, groove and rhythm, a recipe ready to explode."

Venom Prison: Samsara
UK outfit Venom Prison are back with their new album Samsara. The follow-up to 2016’s Animus was described by Metal Hammer as "a twisted modern death metal classic."View Deal