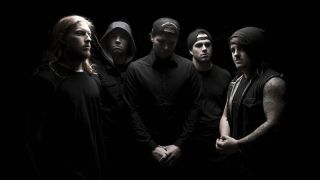 Brisbane bruisers As Paradise Falls are premiering their new video for Star Blind exclusively with Metal Hammer. Taken from their forthcoming album Digital Ritual, the song delves into the idea of celebrity and society’s idea of fame in the modern era, powered by some savage metallic hardcore.

This music is the band’s first output since the sudden death of guitarist Glen Barrie in 2015. Glen passed away in his sleep at the age of 26 while on tour, but left behind a wealth of music for what has now become Digital Ritual. To find out more about the new album, Glen’s impact, and the deeper meaning behind Star Blind, we had a quick chat with guitarist Danny Kenneally.

What is the meaning behind the song Star Blind?

“Star Blind is about the cultural phenomenon of fame within the digital landscape and how often people forsake their better nature to attain fame.”

You seem dead against the idea of celebrity and being ‘internet famous’. Why?

“I don’t have a problem with fame itself really, after all we are a band trying to reach people and hoping they enjoy our music. Moreso I have a problem with idea of fame for the sake being famous. It used be that you were famous for contributing something worthwhile to the world – whether it be literacy, science or the arts. These days you could be sleeping with a celebrity and be considered famous just by association.”

Why did you choose it as your first single from Digital Ritual?

“We felt it was a strong song and something of a surprise to people that have heard As Paradise Falls before. It also happened to be the first ever song I ever wrote for the band, so it seemed appropriate that it be the first song with vocals people hear.”

What is the story behind the Star Blind video?

“The story of the Star Blind clip involves two main characters. The first is a young woman and the second a strange masked figure who exists inside the digital world. Appearing to be in trouble, the masked figure beckons the woman into another realm in hopes of assistance of some kind, but later we find out that this masked man isn’t really in as much trouble as he leads us to believe.”

It’s the first music you guys have released since the passing of Glen. What was it like going back into the studio?

“When everything happened with our guitarist Glen we had finished 11 tracks. All of these tracks feature the band’s work including Glen; he actually got to listen to a lot of it and was loving it as much as we were. Six or seven months after Shaun the band we recorded all the vocals here in Brisbane, and a few of us went back to finish the mixing and mastering of the album. We didn’t really know what to expect, whether it would be weird or uneasy or anything like that, but going back to finish this album was the best decision we could have made.

“It was almost like closure for us, to sit there on the final morning with the album playing and just knowing that we actually did it was something special, and something that will never be forgotten by any of us. We felt like this was a moment where Glen would be listening with us and sharing that feeling we all had of pure emotion, and also an achievement because it previously looked as if this moment might not have been possible. It was a very positive experience.”

How much of an inspiration was Glen on your forthcoming album?

“On the lead up to the recording of the album, we actually booked Karma Sound Studios 7-8 months in advance with one demo behind us. With this in mind, Glen and I would meet at least once a week with all of our song ideas and work them out together to get a demo down and send to the rest of the guys to get their feedback, and then we’d have band practice like twice a week to get everything together. So Glen was a mega inspiration here. I looked up to him and he inspired me to practice more and more to get to the level we need to be at to produce the album we were able to.”

You’ve described the album as a celebration of his life. Do you think he’d have liked the record?

“I have no doubt that he’d be in love with this album. I spoke to him a lot about our future, our direction, and where we are now is leading down the path we spoke about. He loved what he had heard, he loved what he had tracked in the studio and he trusted us. To have that level of trust that fellow band members’ idea will lead to something, to push everyone’s creativity, is a pretty special thing to have.”

It’s also the first album with Shaun Coar on vocals, is this album something of a rebirth for As Paradise Falls?

“Rebirth is a good description for it, actually. We’re not completely different to our previous self, we just have a large evolution in the path we were going. With Shaun, we have the opportunity for clean vocals and we have the opportunity for some ridiculously heavy and eerie vocals that he’s not done on previous projects. I think we’ve got the vocal balance right on this one and it’ll come to light the more we release new music. The musical aspects we’ve been limited to in the past that are now blown right open for us.”

Digital Ritual will be available later this year.

The History Of Australian Metal In 10 Bands