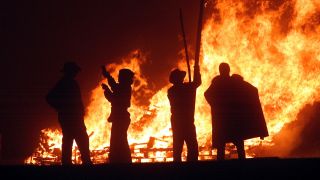 The clocks have gone back, and winter is upon us. Everything’s dark and cold and wet, like the inside of a penguin’s cloaca. And in the darkness, an age-old battle wages. Two powerful forces separated by just under a week, but also infinity. Which is better, Halloween or Guy Fawkes Night? We reckon it’s the latter…

Halloween has badass roots, originating with the Gaelic Pagan festival Samhain. There’s centuries of culture and tradition steeped within it. And yet, these days, doesn’t it feel a bit more Poundland than pagan?

Ancient folklore has given way to Primark skeleton onesies. Fireworks might be for sale in most supermarkets, but they’re still best purchased from dodgy-ass shops that only exist for a week, employ nobody with a full set of teeth and definitely aren’t VAT registered.

Razor blades are a myth, burns are real

Halloween brings with it loads of urban legends, like the one about razor blades being hidden inside apples to de-tongue unsuspecting kids. That’s all they are though, urban legends. Guy Fawkes Night, however, has the very real, very scary “never go back to a lit firework”, a rule everyone knows a mate’s mate’s dad’s mate’s mate who has fallen foul of. The only myth about that is a few mything fingers. (Sorry.)

The point of Guy Fawkes Night is to burn effigies of a failed anarchist whose Gunpowder Plot was set to blow up the Houses Of Parliament. There is so much badassery in that sentence that even reading it just caused your chest hair to get thicker. In contrast, Halloween is when your friend Gary dresses as a funny cowboy and tries to snog everything.

Both Halloween and Guy Fawkes Night have space in them for fruit. Halloween has the custom of bobbing for apples, where you put your hands behind your back and try to eat an apple as it floats in a bowl of water. Guy Fawkes Night has toffee apples, fruits coated in the hardest substance known to man, that shatter people’s teeth into dust or gnarly-looking jaggedy fangs. Only six toffee apples have ever been successfully eaten. They’re basically a weapon.

Halloween is wall-to-wall sexy cats. Being a sexy cat is fun, sure, but it’s not very metal. The closest to a sexy cat in metal is Kiss drummer Peter Criss, and come on, he must have regretted the cat thing half an hour in. It’s rubbish. Even his name – Peter Criss, The Drummer From KISS – makes him sound like a one-off Viz character.

Imagine going trick-or-treating at Bruce Dickinson’s house. Do you think he’d present you with a big bowl of candy? Would he hell. He’d give you a clip round the ear, remind you that this was Britain, damn it, and deliver a five-day-long fascinating lecture about the state of the world politically in 1605 and what led to the Gunpowder Plot being hatched. Then he’d tell you not to eat sweets, and he’d produce a roast dinner from nowhere and you’d eat it while loads of fireworks went off and it would be delicious.

Halloween is all about fakery – makeup, facepaint, costumes, imitation blood. Fireworks Night is about very real, very powerful, very hot flames. It’s the difference between the pageantry of Black Veil Brides (who definitely get really excited on Halloween) and the just-some-bloody-blokes-in-denim of, like, Saxon. Saxon seem like they know their way around a Catherine wheel.