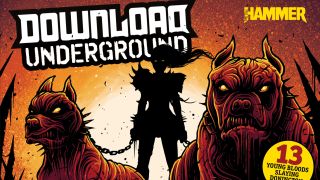 GET YOUR CD WITH YOUR COPY OF METAL HAMMER HERE

Taking cues from Refused and RATM, this New York hardcore crew are on a “mission to bring honest, pissed-off music to the world”. This scream-along from 2013’s Anonymous album, is guaranteed to start pit-riots.

Forget the Bible or the Necronomicon – Nottingham’s Evil Scarecrow have the real Book Of Doom. Or at least they did, before… well, just listen to this. And get ready to see Dr. Rabid Hell, Brother Dimitri Pain, Kraven Morrdeth and co. for more weird tales…

These Boston punks spin fictional stories about a working class family living in post-WWII USA. Taken from third album Letters Home, this is a heartbreaking story of drug abuse and abusive relationships.

Lincoln’s Blood Youth formed from the ashes of Climates, who supported Beartooth for their UK debut show, and there’s a little of Caleb Shomo’s crew in their sound. While the lyrics of Cold Sweat document some pretty tough stuff, they can also write a strong hook.

Wolverhampton duo God Damn clearly don’t give a fuck about the big man, and from the sounds of it, they don’t care about you either. Blasting in at two and a half scuzzy minutes, When The Wind Blows sounds like having your ears held against a meat grinder.

6. The One Hundred – Kingsmen

‘I’m sick of this shit, it’s getting me vexed!’ spits Jacob Field on Kingsmen, before he switches to screaming that detonates a massive chorus. The Londoners supported Papa Roach this year, and their grime/metal/electronica mash-up is explosive.

With huge choruses and many hours of storming stages at Warped Tour under their belts, Aussie rockers Hands Like Houses are an ideal festival band. Trenton Woodley’s vocals might be clean, but there’s no denying the urgency and power of the riffs on I Am.

EMP!RE have a knack for drawing a positive sound out of negative sentiments. Welding rock riffs to soaring vocals, these melodic Brits pour their disappointment with human nature into a surprisingly enjoyable song.

With straight-up rock riffs and a load of distortion, No Home sounds like the kind of song you’d hear blasting from a grungy bar on the wrong side of town. And you can bet London’s LTNT will sound as good in a packed tent as they would down a shady back alley.

The Wild Lies have the Devil on their shoulder in this song, and we all know that the horned one has the best tunes. Taking their cues from the more classic side of rock, this High Wycombe quintet are all sleazy riffs, epic guitar soloing and big old mega choruses.

Combining rock’n’roll, fuzz and psychedelic vibes, Talk Like An Aztec feels like a disturbing and dangerous headtrip into another world – one where you’re not quite sure what’s going to happen next. Watch your backs when this Southampton duo are around…

Vocalist Hollis is obsessed with teleportation: “I hope one day when humans can rise out of the third dimension we live in and open our minds and hearts, we can learn how to access and use the rest of our brain that we don’t currently use,” she says. Minds. Blown.