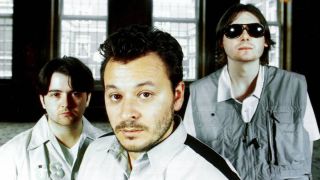 It was entirely appropriate that Manic Street Preachers had just released their sixth studio album, Know Your Enemy, when they met Cuban revolutionary Fidel Castro on his home turf back in 2001. Renowned for their spiky political punk sloganeering when they first glammed up a moribund, grunge-obsessed rock scene in 1992, the Welsh band had already scaled impressive commercial heights by turning their scattergun rage into anthemic stadium rock. A Design For Life remains a great tune and the oddest of lighter wavers. Its first word is ‘libraries’, for heaven’s sake. But its huge impact had made the band safe, somehow, where once they prided themselves on agitating. Know Your Enemy, a curious hotch-potch of musical styles, all chained to bombastic political sloganeering, looked purpose built to explode the Manics’ comfy relationship with success.

The centrepiece of the new album was Baby Elián, a tune addressing what was a hot topic at the time. In November 1999 Elián Gonzalez’s mother drowned while trying to leave Cuba with her boyfriend and get to the United States. Her son was five, survived the journey and made it to the US. Family relatives petitioned for the youngster to stay there, but his father wanted the boy returned to Cuba. The US courts eventually decided in favour of the dad, and Elián went back home.

‘Kidnapped to the promised land/The Bay of Pigs or Baby Elián/Operation Peter Pan/America the devil’s playground.’

Lyricist Nicky Wire left nobody in any doubt about whose side of the fence he was on as this isolated incident served as a microcosm of the long-lasting standoff between the capitalist US and communist Cuba. So it was no surprise that when the opportunity arose to play in Havana to launch Know Your Enemy in front of the country’s revolutionary leader Fidel Castro, the band jumped at the idea. Especially because it gave them the kudos of being the first major non-communist rock act to play the country’s capital, Havana, since 1979. The band called their move “a gesture of solidarity” and the chance to meet Castro “the greatest honour of our lives”.

For all of its revolutionary fervour and notable successes – fantastic health system, almost total eradication of homelessness, higher literacy rate than the UK – Cuba in 2001 was far from perfect. Prostitution was rife, wages generally low, attitudes to gay people still draconian. So you could easily castigate the Manics for overtly supporting the then 75-year-old Castro’s regime. But then again, what country in the world has a government that’s free from sin? You could also accuse the band of opportunism and seedy profiteering, jumping on a counter-cultural bandwagon to promote something as vainglorious and consumerist as an album of pop music. But bassist Wire was quick to dismiss accusations that this was nothing more than a cheap publicity stunt.

“People who think that are stupid,” he said. “Cuba has been a major influence on me. Not just in politics, but in sport. There’s a myth that in order to succeed you have to have the best coaches and technical facilities, but Romania and Cuba win more gold than the UK. This is not like a student Che Guevara thing. It’s just that Cuba for me is the last great symbol that really fights against the Americanisation of the world.”

The mould-breaking gig took place on Saturday February 17 at the perfectly named Teatro Karl Marx in Havana. Most of the 5,000 guests (some paying 17p, others invited simply to make sure the show is full) were only casually acquainted with the Manics’ catalogue. Nonetheless, all were desperate to show some Cuban love and see what all the fuss was about. But it was one guest above all who created history here, the Commander In Chief himself.

Castro visited the band backstage before the show and Wire, fearing that excessive volume would perturb Castro, told the leader, “It might be a bit loud tonight.” “Will it be as loud as war?” he shot back. Touché.

And so one of the most famous political figures of the last century took his place in the balcony to watch Wire, vocalist/guitarist James Dean Bradfield and drummer Sean Moore do their agit-rock thing. With a ginormous Cuban flag as a backdrop, the band rocked their way through a powerful and inspiring set. Had they sold out because Wire had acceded to the request not to wear a dress on stage as he usually did (just a bit too subversive for the revolutionary leader, perhaps…)? Maybe, but nobody could argue against the fact that the Welsh band both created and changed rock history here. And when Castro rose from his seat to give his own personal standing ovation for an acoustic version of Baby Elián, then it really was a big one off the bucket list for the Manics.

After the show and buzzing with adrenaline and elation, the band’s triumphal mood was only enhanced by their sense of amazement at what they had pulled off. But even the profound political and cultural implications of the moment were eclipsed by Wire’s wide-eyed observation on Castro: “I’ll tell you one thing, he has an enormous cock!”

Castro’s nickname, apparently, is The Horse. “Now we know the source of his power!” added Bradfield.

Fifteen years on, and much has changed. US President Barack Obama became the first US president to visit Cuba in 88 years, and he has since stated that the commercial, economic and financial embargo first imposed on Cuba by the US in 1960 must be lifted. Cuba and America are putting the troubles of the past behind them. And doubtless the Manic Street Preachers, never a group to undersell their own cultural importance, will be quick to take a slice of the credit for this historic thaw in relations.