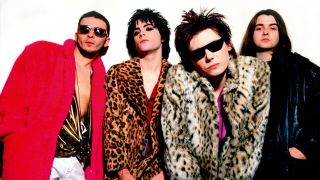 You all grew up around Blackwood, a small town in the South Wales Valleys. In such a community was fighting simply a fact of life?

James Dean Bradfield: Blackwood was a very traditional blue-collar place, and on weekends there was a lot of random violence when people were out drinking – a mini-explosion of frustration. It wasn’t the best environment to be dressed in our mums’ blouses with make-up on. We were the epitome of a walking target.

Nicky Wire: There were twenty-two pubs on Blackwood High Street, and we’d be prancing through them looking like the New York Dolls.

A red rag to a bull.

JDB: It was, almost subconsciously, a massive statement of intent. We were proud of the working-class culture that we’d grown up in, but in our own strange, glam-rock way we were representing a more feminine mind-set.

Sean Moore: Not me, though. I had the big hair like The Alarm, but I was more of a goth.

NW: I was always particularly effeminate. When I played football for the under-twelves I got hacked a lot because I looked like a girl. But I was in a hard team. Even at that age we all had a fag at half-time.

Were you tough enough to punch your way out of trouble?

JDB: Oh, it was more punched than punching out. It was a running battle when we were young. You’d be fifteen, in search of illegal drink, and you’d end up in a rugby disco in a Valley town on a Friday night. Walking home you’d meet some locals and it would end up in a fight, simple as that. But in those days the violence was, dare I say, a little more honest. It was just straight-up fighting, not with knives like now. And it also felt like the price of an education. I’m not saying it was nice to take a smack in the phizzog now and again, but you did feel ready for the world when you went out into it.

NW: I was definitely not a fighter. I was a runner. I was vaguely proud of my looks and my brain and I didn’t want them fucked.

Did you ever take a real beating?

Sean Moore: I didn’t. But when we were eighteen we all went to an indie disco in Newport and got set upon by some local casuals in McDonald’s. James took a sly right hook that smashed his jaw.

Presumably the South Wales Valleys was never an easy place for bands to play.

JDB: Not really [laughs]. From seventeen to twenty I worked behind the bar at the Newbridge Memo, which was on the proper gig circuit. Sunday night was blues night. The Gwent chapter of the Hells Angels would be there, and if the band didn’t have enough blues-based material they’d get bottled off. Steve Marriott played there one time, and when I went to his dressing room with his rider – four crates of Newcastle and two bottles of Jack Daniel’s – he was bent over the table doing a line of coke. I said: “I’ve only ever seen that done on Miami Vice.” He said: “Fucking hell, Taff, you’re a bit wet behind the ears!” I told him if he didn’t play blues he’d get bottled. He said: “Cheers for the tip, son.”

Some of the early Manics gigs were a bit tasty.

NW: There was one in Glasgow where they were syringing us with piss and cider. And in Reading, at the After Dark club, a load of football hooligans turned up. That got very edgy – way beyond antagonism. But with a bass in my hand I always felt braver on stage than I ever did as a civilian.

SM: The great thing about being a drummer is I had three people in front of me – and a drum kit, all that hardware – so I was pretty safe.

JDB: With some places, you knew there would be trouble. We’d go to the Buzz club in Aldershot, a squaddie town, and we’d get some Taff-baiting – boys shouting “sheep shaggers”, wanting it to kick off. But we just faced it down. Our mettle had been tested in the Valleys.

Have you ever felt that your music has incited violence in a crowd?

JDB: Let’s face it, some of the best rock music really affects you emotionally because it inspires a kind of borderline violent reaction in you. It doesn’t mean you want to hurt people, but it does incite that little DEFCON 5 in your head.

Has there ever been a fight between the band members?

NW: This is really pathetic. In the early nineties we played at Treforest Polytechnic. And as we were driving home in van, I had an argument with James and he grabbed my hand and bent one of my fingers back – a long way. I bowed down to his physical superiority – just as he bowed down to my intellectual superiority.

JDB: I just absent-mindedly bent Nick’s finger back because he was taking the mick out of one of my ex-girlfriends. Nick had a really good way of raking over your emotional coals. But we’re not the kind of band that could have survived real violence between us.

Who is the hardest person you’ve ever met, Joe Calzaghe?

NW: Probably. I’ve been to a few of his fights and he’s come to our gigs. He went to the same comprehensive as us, and he’s one of the greatest British boxers ever. Twenty-one consecutive world title defences and he remained unbeaten.

Is there anyone else you admire for their fighting capabilities?

NW: When John Prescott hit that protestor on the campaign trail, at least it showed that he cared [laughs]. Can you imagine Ed Miliband doing that? There’s such a lack of fight in the Labour Party now. It’s just a metropolitan think tank that bears no relation to reality. And when the Left abandons the kind of people it should be representing, the idiots on the Right always fill the void. It’s deeply worrying. But I’m so disenchanted with politics that I can’t bring myself to vote for anyone.

Have you given up that fight?

NW: No. I’m just trying to find a direction for it.

And after all these years, what would happen if somebody wanted a scrap with you now?

JDB: I haven’t had a fight since 1993, when some dickhead tried to pull me out of a taxi outside the Astoria. He said: “I had it first,” and slapped me in the side of the head. So I punched him. But I couldn’t do it now. I’m a forty-five-year-old father-of-one. After throwing two punches I’d be exhausted. I’m a man that knows his limitations. As they say in boxing: my arse has gone.