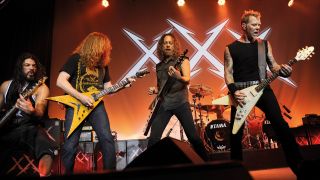 Metallica launch their festival! The first Orion Music + More fest takes place in Atlantic City. Metallica play Ride The Lightning and The Black Album in full, backwards – the latter of which they then do for an entire tour.

The guys play China for the first time ever, doing two sold-out shows in Shanghai.

The band’s first movie, Through The Never, is released in cinemas. It gets moderate reviews (we gave it a 6⁄10) but performs badly at the box office.

Penguins and fans alike witness Metallica play at Carlini Base in the South Shetland Islands of Antarctica! We’re still not entirely sure why, but it looked awesome.

The first ever Metallica By Request tour takes the globe. Most of the setlists end up being standard Greatest Hits sets with Whiskey In The Jar thrown in. Ho hum.

Metallica release Lords Of Summer – First Pass Version and play it at a few select dates.

The band headline Glastonbury festival in a historic performance that blows a few thousand hippie minds.

Before another hearty global trek, Lars tells Rolling Stone magazine that the band have 20 songs written. We’re getting there!

Remastered versions of 1983’s Kill ’Em All and 1984’s Ride The Lightning are released, with unheard bonus material.

The once snotty thrash upstarts become the faces of luxury menswear brand, Brioni. Fair’s fair: they look fly as fuck.

Metallica drop a new single and announce that Hardwired… To Self-Destruct will land in November. It’s officially time to Get Stoked.

Every Metallica album ranked from worst to best