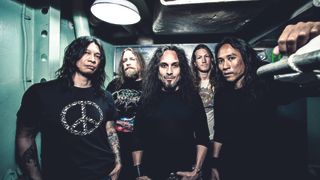 When Death Angel released their debut album, The Ultraviolence, in 1987, the band were all still in their teens. Five young kids from San Francisco on a mission to gatecrash the thrash metal party, they punched above their weight from the start and, nearly 30 years on, remain one of the genre’s most revered bands. Reflecting on his band’s early days, frontman Mark Osegueda admits to being startled by how fresh-faced they all looked.

“Yeah, I do look at us and think ‘Jesus Christ, we were young!’” he laughs. “We’d go on tour and stop at truck stops and people would stare us and we’d think ‘What the hell’s wrong with these fools?’ But now I look at the photos and, ah, now I get it, ha ha ha! At the same time, I look back on those days with a fondness. One of the proudest days of my life was when that first record came out. That era was such a special time.”

The first era of Death Angel ended in 1991 as grunge started to exert its influence on the rock world. They reunited after a 10-year hiatus and, since 2004’s comeback album, The Art Of Dying, these Bay Area legends have been enjoying a second chapter every bit as satisfying and successful as their first. Remarkably for a veteran band, new album The Evil Divide is arguably their strongest to date and threatens to drag a new generation of fans into their bruising wake.

“The really crazy thing is when I look out at our crowd and how it’s evolved,” says Mark. “A lot of our original fans are up front but there are all these young thrash kids, 15 or 16 years old, looking the same as we did way back when and they’re going apeshit! We’re vampires and they’re our blood, keeping us young and it’s brilliant. I think we’re much stronger songwriters today and we’ve grown as musicians, but there would be no now if we hadn’t laid those foundations.”

With Death Angel busy in North America this summer, Mark’s only opportunity to hit the UK will be when he sings with Metal Allegiance at Bloodstock in August. A regular fixture in the all-star band’s live incarnation, he’s looking forward to getting his first proper chance to check out the UK’s biggest metal party.

“Yeah, Death Angel played there a few years back, but we literally flew in, played at noon, had 20 minutes to dry off and then went straight back to the airport!” he recalls. “So this time I’ll be with Metal Allegiance, we’ll have the full day to hang out and I’ll get to know what Bloodstock’s all about. I’m sure it’ll just make me more hungry to get back there with Death Angel. I’d play in England tomorrow if could!”

FOR FANS OF: Anthrax, Testament, Sylosis