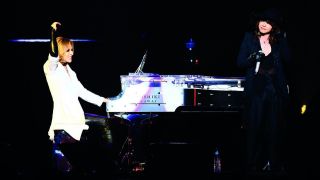 Thousands of people jump into the air, while crossing their arms above their heads to form an X shape. Onstage, their heroes X Japan peel out high-energy band anthem X, well used to the customary formation dance that has everyone moving in perfect time to the music.

It is October 2016, and we are at Makuhari Messe convention centre in Chiba, the suburban birthplace of X Japan, just outside Tokyo, for the three-day festival Visual Summit Japan. Curated by mainman Yoshiki, its aim is to bring the country’s visual kei bands under one roof, and show Japan – and the world – how strong the scene is. The band are headlining all three nights, and before they’ve even played a note of the first set, a ton of the merch has already sold out.

The choreographed dance is a striking sight, but then X Japan are no ordinary band. As we’ve previously reported, they formed in 1982, influenced by bands such as Kiss and the Sex Pistols, and spearheaded the country’s visual kei movement – a wave of rebellious rock bands who traded on having a flamboyant image. They have sold more than 30 million albums, and have played the 50,000-capacity Tokyo Dome 18 times. But their story is also filled with tragedy. When founder/drummer/pianist Yoshiki was a child, his father died by suicide, and music became his escape. The band became famous in their home country, but split in 1997 after singer Toshi was brainwashed by a cult. Later, two members would take their own lives.

Now reformed, X Japan have set their sights firmly on the western market, and are set to release a new album later this year. For this weekend’s festival, they have flown in Metal Hammer and a group of US journalists. A couple of them have heard of the band; most have not. As we gather in a cordoned off area down the side of the venue, the culture shock is real, the jetlag adding a surreal edge to proceedings.

Watching their set for the first time is like seeing the most famous band you’ve never heard of, or being an extra in a scene from a high-production movie. They open with a grandstanding short film of live footage from notable worldwide venues, before Yoshiki appears onstage and poses behind his drumkit, a spotlight trained on his shirtless torso, as his classical composition Miracle swells through the room. The crowd react with high-pitched wails. What follows is a set that harks back to ’80s bombast and showmanship, in the vein of Kiss and Mötley Crüe. There’s pyro, confetti cannons, lasers, and a giant, light-up X. At one point, Yoshiki’s drum kit rises on a hydraulic platform. Meanwhile, the pacing is emotionally disorientating; after everyone’s jumped up and down to X, there’s an emotional tribute to fallen bandmates Taiji and Hide. But then a wrestling announcer-style voice booms through the speakers to introduce the band members, followed by the earnest, piano-led ballad Endless Rain.

Often, the serious rockstar posturing comes across overwrought, OTT and cheesy. But those reactions are tempered by watching the audience, who are completely, totally and fully immersed in the spectacle. They pump their arms in unison, fall silent when their heroes talk, and hold plush, red-haired Hide dolls aloft in honour of the late guitarist. Though the fans range from their 20s to their 60s, their adulation reaches boyband fever pitch. It is, to borrow from the vocabulary of Lars Ulrich, a mindfuck.

After three hours, the gig ends with a guest appearance from Kiss legend Gene Simmons, who leads a rendition of Rock And Roll All Nite, in a surreal ending to the sensory overload.

After a sleep, and a morning of sightseeing (we are whisked off to the Kiss Expo, the reason why Gene is in town, and which features a Yoshiki-themed exhibit), it’s time for round two. Back at the venue, the scale of fandom is even more apparent. Yoshiki and Hide clones wander past a stand advertising Yoshiki’s mobile phone deals. Some fans have paid hundreds of pounds to watch the concert from special seated areas, where they can take home their own chair. Fans without tickets have come to the venue anyway, hoping to soak in the atmosphere.

Knowing what to expect, tonight’s show is less about surprises, and more about noticing the details of what’s happening onstage. During Kurenai, the duelling between lead guitarist Sugizo and rhythm guitarist Pata is impressive, while 2015’s Born To Be Free is a rush of retro-sounding energy that combines the galloping of Iron Maiden with the melody of Kiss’ Love Gun. Everyone’s personalities emerge, too. Toshi is the hype man, playing to the crowd but always aware he’s sharing the spotlight with bandleader Yoshiki. Sugizo has the swagger of Nikki Sixx and the bone structure of David Bowie, while long-haired Pata is contrastingly chill. Bassist Heath is a slight, quieter presence. By the time it gets to X, we automatically rise up onto our toes, anticipating the jumping. It becomes less about observing the performance, and more about experiencing it.

By Sunday evening (after some of the journalists have had a trip to Tokyo’s Sanrio store, where Yoshiki has his own ‘Yoshikitty’ Hello Kitty line), watching X Japan has become almost normal, like taking part in a recurring daily ritual. As usual, the drama is high, and the emotions come thick and fast, moving from collective ecstasy to agony. Tonight, there’s also some lengthy onstage chatter, which our interpreter explains is about their new documentary, We Are X. Made by the same team as 2012’s Searching For Sugar Man, it’s a poignant exploration of their storied history. “I couldn’t move after seeing it,” says Toshi. “If I were a scriptwriter, I would not write something like that,” adds Yoshiki. “That’s how shocking the movie is.” It’s this mythical quality that adds an extra dimension to their show. Once you know their background, you can appreciate the sadness of their remembrances, the theatricality of musicians who haven’t had a conventional adulthood, and their genuine hunger for a successful – and international – comeback.

When it’s time for X, we put aside our self-consciousness and cynicism to join in with the jumping. It might be uncool, but it’s not far removed from Slipknot’s floor jump during Spit It Out, or Skindred’s Newport Helicopter.

The following day, we are front row at Tokyo Fashion Week, watching an elaborate show to promote Yoshiki’s own kimono line. He sits at his crystal piano, playing dramatic music while western models strut down the catwalk, before a massive finale sees him drumming in ‘rain’ falling from the ceiling. It’s another facet to his huge celebrity brand.

Over dinner (he has booked out the entire restaurant, and we are drinking his own branded wine), he tells us that the Visual Japan Summit is actually a revival of a gathering he organised 24 years ago, and admits that the experience has felt like going back in time. X Japan’s dream to conquer the west will now hinge around whether they can update their sound and cross a cultural divide, without the benefit of having the nostalgic legacy they enjoy in Japan. But with their new album poised for release, and murmurings of Yoshiki collaborating with Marilyn Manson, their future’s bound to be entertaining regardless.

We Are X is in cinemas now.