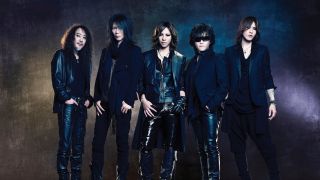 Madison Square Garden is one of the world’s most famous entertainment venues. Opened in 1968 as a boxing arena, the 18,000-capacity hall in Manhattan now stages ice hockey, basketball and pro wrestling in addition to live gigs and comedy. Each April, the Garden plays host to the Ringling Brothers and Barnum & Bailey Circus, a gloriously extravagant production which is introduced by the magnificent sight of elephants walking down packed New York streets. But this most storied of venues has never seen anything quite like this.

Yoshiki Hayashi runs along the stage throwing red roses into the audience. He then wipes down a grand piano with a white scarf, and begins playing a dramatic classical music theme. As sounds of apocalyptic storms crash around the room, he leaps behind his drumkit, which detaches itself from the main stage and begins slowly moving down an extended platform into the audience.

X Japan are the biggest rock group ever to come out of Asia. They’ve sold 30 million albums, filled the 55,000-capacity Tokyo Dome a record 18 times, and are swamped by hysterical fans when they visit China, South Korea, Taiwan and Thailand, countries which are taking a live TV simulcast of this performance. Yoshiki, the main songwriter, drummer and pianist, has written and performed a concerto for the Emperor of Japan, has his own Via and Mastercard issued by a Japanese bank, is the inspiration behind a new Stan Lee comic book series (Blood Red Dragon) and even has a Hello Kitty range – Yoshikitty – named in his honour.

The quintet pioneered the visual kei movement – a flamboyant clash of music, art and fashion, with its roots in punk, glam rock, anime and noh theatre - which has spread worldwide thanks to the success of artists such as Dir En Grey, The Gazette and D’espairsRay, and they are considered as significant to the development of rock in Asia as The Beatles. Which is why there are over 10,000 fans – metalheads, JRock devotees, stylish Japanese teenagers, cosplay fans spilling over from this weekend’s New York ComiCon event – in Madison Square Garden tonight, singing along in Japanese and making the band’s ‘X’ symbol with crossed arms./o:p

On the afternoon following his band’s triumphant performance, the slender, handsome Yoshiki is grace personified as a documentary film crew, and assorted members of his band’s retinue, flit around him in a Manhattan hotel suite. With androgynous features making him appear younger than his 48 years, the Chiba-born artist speaks quietly and in measured English as he relates tales of X Japan’s formative years, which only serves to accentuate the drama and tumult of their remarkable history.

It’s a story born from tragedy. When Yoshiki was 10 years old, his father committed suicide. Each month for two or three years before his passing, Mr Hayashi had bought his prodigiously talented pianist son a classical music album. After his death, Yoshiki’s mother handed her eldest boy a fistful of coins and told him that from now on, he should choose his own records. Walking through a Tokyo record shop, the boy noticed a seven-inch single featuring four faces in “crazy” make-up, and asked a member of staff if he could hear the record. As Kiss’s Love Gun pumped through the speakers, young Yoshiki’s world was turned upside down.

“At the time I was sad and confused and angry, crying every day,” he recalls, “and this music just absorbed all those feelings. After Kiss I discovered Led Zeppelin, David Bowie, all this great rock music. The same year my mother bought me a drum set, and I began playing every day, releasing my anger by hitting drums. I was almost suicidal myself after my father passed away, but rock music saved me.”

Thrilled at discovering a world beyond classical music, Yoshiki shared his new discoveries with his classmate, Toshi Deyama, his best friend since the boys met aged four at elementary school. In 1977, the pair started their first band, Dynamite, who later changed their name to Noise, and then X. Japan already had its own heavy metal scene – spearheaded by the bands Loudness, Bow Wow and Anthem – but Yoshiki and Toshi wanted to carve out their own “super heavy” world.

“It was so much fun,” says Yoshiki. “We didn’t care about anything but playing music. We’d travel all over Japan, play, get drunk… and then realise that we’d spent all the money we needed for fuel to get back home, so we’d sleep in our car. Those were the best of times.”

The band’s flamboyant image developed in a somewhat haphazard fashion. The more make-up they applied, the more offence was taken by conservative members of Japanese society, which spurred the teenagers on to create ever more outrageous looks. “We were little rebels,” laughs Yoshiki. “So it became like ‘Hate us, we don’t care.’ But the more that critics hated us, the more kids started showing up at shows.

“We were taking influence from different sources – Japanese animation, Kiss, Bowie, Queen, the Sex Pistols, a combination of everything. We loved Discharge and GBH too, so we’d spike up our hair, but one evening we had to go onstage before I’d finished doing my hair, so it was half-spiked, half-flat. At our next gig, we saw a couple of people had their hair done the same way! The more craziness we piled on, the more it seemed to excite people.”/o:p

The band’s first X single, I’ll Kill You, was released in 1985; a second, Orgasm, followed in 1986. The group’s lineup solidified soon afterwards, with the addition of guitarists Hide and Pata, and bassist Taiji. By the time they released their second album, Blue Blood, in 1989, they were the country’s biggest rock group.

In October 2007, X Japan officially reformed. When they returned to play three nights at the Tokyo Dome the following summer, Limp Bizkit’s Wes Borland and Guns N’ Roses’ man Richard Fortus deputised for late guitarist Hide. In the summer of 2010, the quintet finally played their first ever American show, at the Lollapalooza festival in Chicago, and booked their first US tour, fulfilling a life- long dream for the reunited Yoshiki and Toshi. “I wasn’t sure we’d have an audience at all,” Yoshiki admits. “But pretty much everywhere was sold out. It was so surreal, like a dream.” In July, Yoshiki found himself in London on the same night that Japan’s latest overseas sensation, Babymetal, were playing their first UK headline show. He went along to the sold-out Forum and stood there marvelling at the sight of a Western audience losing their minds to a peculiarly Japanese group. It was, says the most influential Japanese musician of his generation, “inspiring.” “It’s brilliant to see the divisions between Eastern and Western music disappearing,” he says. “It makes me proud. When you first start playing music it’s such a pure form of expression, and then, somewhere along the way, the business of music can take over and you lose some of that purity. Now that we’re back, I don’t care about sales, or what anyone says about us. I don’t give a fuck, I just want to rock.”

Five other bands to check out and get your collection going./o:p

This Tokyo quartet performed at Wacken and on the US Taste Of Chaos tour. Mixing industrial, electro and metal influences, they looked destined to cross into more mainstream metal circles, but were forced to disband in 2011 after vocalist Hizumi contracted a rare throat condition. CHOICE CUT: Reddish

Hard-hitting and musically diverse, incorporating elements of prog, metal, industrial rock and classical, Kanagawa’s The Gazette sound a lot grittier than they look. The quintet are currently in Japan on their Groan of Venomous Cell tour, which presumably makes a little more sense over there. CHOICE CUT: Filth In The Beauty

As with many of their peers, Alice Nine’s more outre visual kei stylings have largely disappeared as their career has progressed. The quintet borrow heavily from dance music, but guitarists Tora and Hiroto bring a satisfying crunch to even their most chart-friendly tunes. CHOICE CUT: Rainbows

One of the most successful and influential visual kei bands, Luna Sea share guitarist/violinist Sugizo with X Japan, with whom they’re long-time friends. More influenced by punk and alternative rock than their peers, the band officially reunited in 2010 after disbanding in 2000. CHOICE CUT: Tonight

SuG apparently take their name from the English word ‘thug’ but we suspect something may have got lost in translation there. At their heaviest, SuG come across like the world’s prettiest Enter Shikari tribute band, with pop and electronic elements dominant in their scattershot musical melange. CHOICE CUT: mad$hip