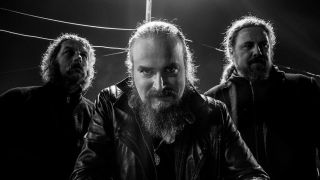 Featuring members of the revered and seminal Ved Buens Ende, Virus may have deep roots in the mutant strain that infected Norwegian black metal in the mid-90s, but they’ve long since travelled far beyond the scene’s borders, taking a host of intrepid metalheads, as well as fans of avant-rock into new, reality-warping realms.

Back after a four-year hiatus with a new album, Memento Collider – due out on June 3 via Karisma Records – the three-piece fronted by scene veteran Carl-Michael ‘Czral’ Eide have once more set up camp in the kind of unstable, post-apocalyptic environs fans of Voivod might appreciate. Songs lurch and stumble like they’re leading an expedition amidst unnerving, discordant riffs where gravity is a foreign concept, evolution is drunk and all your maps are constantly morphing.

For the hardiest of sonic adventurers, we have an exclusive glimpse into this delirious dystopia in the retina-rattling form of Rogue Fossil – an animated video made in conjunction with in-demand artist Costin Chioreanu – a man whose surreal and symbolic visions for the likes of Mayhem, Skuggsjá, Paradise Lost and Vulture Industries are but preludes to the extraterrestrial oddness that’s found its perfect symbiosis here.

Set controls for Headfuck Centauri and enter the weird and wonderful world of Virus here!