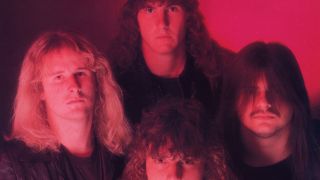 One of the most iconic death metal albums of all time is getting a reissue that includes not just the album, but two more discs of extra material. And because we bloody love Death and this album is a bona fide essential, we're streaming the first two discs of the reissue to you guys.

As well as this exclusive stream, we also had the opportunity to talk to Leprosy-era bassist Terry Butler about the album…

Having joined the band after Scream Bloody Gore, did you feel you were starting afresh after that album, and how aware were you at the time of its importance?

“It was a reboot so to speak for Chuck, Death, Rick, Bill and myself. Chuck never had a full band and had never toured. Massacre were fixing to call it quits so it was union for the best. We weren’t aware of the importance. We just wanted to play death metal.”

Can you give us some insight on how it was to work with Chuck Schuldiner in the studio?

“Chuck was great to work with. We were all buddies so we were comfortable with each other. He was a professional and had a vision for everything.”

This was Death’s first album with Scott Burns on production, who came to have a large bearing on the sound of death metal. What was your experience of his approach at the time?

“Scott was working with Dan Johnson on Leprosy. Dan Johnson owned Par Records who put out Savatage and Pretty Maids. He had just finished mixing Skeptics Apocalypse by Agent Steel. Combat wanted us to use him. Scott Burns had a big input on Leprosy. He loved the music and became good friends with us.”

**A lot of your peers in the Florida scene hadn’t released their debut albums by the time Leprosy was released, even though they were furiously releasing demos. How exciting was that period creatively, and to what extend did you all push each other on in your music? **

“It was a great time indeed. There were many shows to go to and a lot of good bands were trying to get signed. Being part of two bands (Massacre, Death) that were and had influenced other bands was a great feeling.”

Were you aware at the time Pull The Plug was written that that track in particular could become an all-time metal classic?

“I knew it would bit a hit so to speak. Its so damn catchy. When we were writing it I knew it was special.”

Looking back on Leprosy after all these years, do you have some new perspectives on it that you might not have had on the time?

“It just keeps growing in popularity. I’m very proud of it and it’s influence on the scene is tremendous.”

Death – Leprosy is out 28 April on Relapse Records. Pre-order it here.