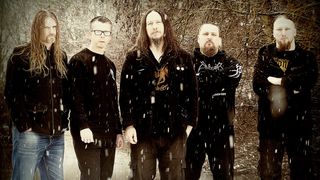 Managing to be both remarkably prolific and a band steeped in true cult aura, North Somerset-based five-piece My Silent Wake are about to release their 10th, Greg Chandler-produced album, There Was Death, from the Minotauro Records caverns on February 16, and we have an exclusive preview in the epic yet captivatingly fraught form of the album’s title track.

Clocking in at six and a half minutes, yet fuelled by a lifetime’s worth of regret and unanswered questions, There Was Death, perhaps not surprisingly, leans more on the deathly side of the death-doom equation, not least to last remaining founding member Ian Arkley’s ravaged vocals. Listen in, though, and you’ll find a pastoral knack for melody that would make My Dying Bride sit up, and a particular sense of perseverance that only the knowingly damned can fully lay claim to.

“There Was Death,” says Ian himself of the title track, “started out a few years ago with a riff written by our live rhythm guitarist, The Drowning’s Mike Hitchen. The song was completed by me and bassist Addam. We recorded last year in 13 Sound and Priory studios. The lyrics were also a long time in development and started with one idea and ended with something quite different. The idea of time stopping completely at an individual’s death (at least in their perception) was the starting point and a survival of death was the finishing point. This survival is something very different to that described by any religion and is very open to interpretation. The song is summed up in the end refrain, ‘Of science, of religion, chained by these confines’.”

So without further ado, press play below, drag yourself to a corner of the room, and huddle under the crushing weight of There Was Death right now!

Check out My Silent Wake’s Facebook and Bandcamp pages!