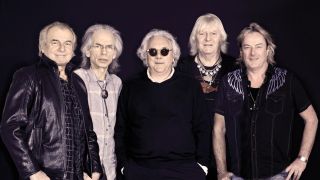 Trevor Horn is joining Yes’ 50th anniversary celebration shows at the London Palladium this weekend. He’s also sung the vocals and added some tweaks on a new version of the Fly From Here album (Fly From Here - Return Trip).

FIFTY years of Yes! You’ve loved the band since before you ever joined, haven’t you?

“Nobody else has ever done what they’ve done. In those fifty years there hasn’t been another two or three Yeses. It was an exceptional thing to get those guys together at that point and for them to have that idea of that kind of music, which was and is really something else. And they’ve made so many really good albums over the years, more than very few bands. My personal favourite? Relayer. The Gates Of Delirium. Also Going For The One is terrific. Obviously Close To The Edge and The Yes Album are great too. What I first loved about Yes was that it’s great music for driving, you could get into those long tunes over a journey…”

Talking of journeys, 2011’s Fly From Here, which you produced and co-wrote, is enjoying another take-off, with you now singing instead of Benoit David. What motivated this?

“Well the band suggested it. Because Benoit is French-Canadian, English wasn’t his native language. And Yes lyrics are difficult enough to understand if you’re English in the first place! So it was kind of tricky for him to understand the nuances of what he was singing. And that took up time, really, on that record. Chris (Squire) and Alan (White) would be done in fifteen minutes, y’know? But they spent a long time with Benoit because of his language difficulties. When they asked why didn’t I sing it now, Alan pointed out that if I did then the album would be the same line-up as Drama. An opportunity we’ll never get again now that Chris has passed away. So I thought: why not? Because I have to live with the album for the rest of my life, so I might as well re-do it. And as I was doing it, I changed a couple of solos on it, as one always does. Which is fine, because Geoff (Downes) and I wrote it in the first place, so I didn’t have to answer to anybody! I’ve re-written other people’s songs in the past, and they can get shirty, heh heh…”

Did Fly From Here always feel like a fluid work-in-progress to you?

“Exactly. It’s funny – Chris got me to do the album in the first place by suggesting they just come over and re-record that material. Because we’d never recorded it as Yes, despite doing it on that tour when we needed new material, given there was only so much of the old material I could sing. Jon (Anderson) has an incredible voice; he’s a really hard act to follow. You try singing Going For The One – I couldn’t!”

Was Benoit offended at all by being erased?

“I haven’t asked him. I don’t know if the rest of the band have spoken to him about it, because he left quite rapidly, mid-tour. I don’t know, I wasn’t around. And I haven’t seen the guys for a while as they’ve been out on tour. Last time I spoke to them they were in the middle of re-learning Topographic again… That’s a lot to learn!”

Is it true you’ve been going to the gym and taking singing lessons in preparation?

“Ha ha, I started going to the gym almost two years ago. As we get older we all get a bit disheartened and let things go, so I thought I’d get myself fit. And I have to have singing lessons because it’s just so bleeding high singing Yes! I haven’t spent the last thirty years singing, I’ve spent them producing records.”

Do you listen to Yes now as a producer or as a singer?

“Oh I’m just singing Tempus Fugit this weekend so I just turn up and sing – I’m not going to start changing the band around or anything! Well I might do an acoustic bit from Fly From Here but I haven’t decided yet. I’ve been playing bass a lot lately. I’ve been doing less producing. There’s not much around I’m prepared to spend the time on really. An interesting-sounding record takes a long time, y’know? Listen to a regular mic stuck in front of a regular drum kit. Then listen to Queen. Y’know? It’s a lot of work. You have to believe in the material, and the people.”

Are people who best know you for your Eighties reinvention of pop surprised at your abiding passion for Yes?

“Look, I know prog went through an era of being sort of despised here in Britain, when punk started happening. But I always thought there was something very up, very optimistic in the sound of it. I don’t get the same satisfaction from what’s around now. And even though Yes were out there, Jon’s voice was so appealing, and things like Starship Trooper were great songs. His lyrics back in the day were just brilliant. Turn Of The Century is another of my favourites ever.”

The existence of two sort-of-Yes bands (with the Anderson-Rabin-Wakeman outfit also touring) is weird, isn’t it?

“It is a bit. But this is what happens between people, Fifty years - still going, still arguing! It’d be very hard though to have even Steve (Howe) and Trevor (Rabin), two big star guitar players, in the same band because they’d cancel each other out. Look, at least there’s two Yeses you can go and see! Go see them while they’re still playing.”

Yes play the London Palladium 24th and 25th March. There’s a fan convention at the venue on the Sunday.

Fly From Here – Return Trip can be exclusively pre-ordered via Pledge Music here.