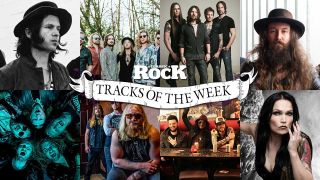 Morning folks, hope you all had the best of weekends and are ready for a sumptuous buffet of new musical delicacies. We’ve got tunes and videos from Rival Sons, Sweet Crisis and a delectable spread of bands you may know and bands you may not. But first let’s take a look at the ones that made your top three last week:

Congratulations to Badflower, who soared to victory (and made us all cry, in a good way) with Promise Me! And well played to Marco Mendoza and Whiskey Myers for honourable second and third places. You’ve all done very well.

Now, let’s see who wins your hearts, minds and ears this week. You know what to do: get listening, get judging, then vote for your favourite in our handy easy-to-use poll at the foot of this page. Right after a lil’ spin of last week’s hard-hitting champions Badflower. Bon appetit...

Rival Sons - Sugar On The Bone

‘Nur nur, nur nur nur!’ beginneth the beefy latest slice of Rival Sons’ 2019 pie, Feral Roots, Scott Holiday chopping out the song’s core distorted riff like a man who's just been told this is his last chance to rock out. Punchy yet enigmatic, not unlike Zeppelin circa Dazed And Confused (only more rumbling, more primal, and minus the violin bow), it’s another winner from an album full of ‘em.

Like rock and soul? Cambridge’s Sweet Crisis have both of them by the caseload, as shown in this organ-swirling, 70s classic rock-evoking new track (think Free, early Fleetwood Mac and Humble Pie having a pleasantly mellow knees-up and you’re on the right track). Summer encapsulated in just under four minutes - the proper kind that we tend to dream of, rather than see, on these shores.

The New Roses - Down By The River

Part beefcake AOR, several parts 80s heartland rock, you’d think these German rockers were born in the USA (ahem…) based on this driving, singalong-friendly number. Catch them opening for the Scorpions in Europe and on the KISS cruise this summer.

The vibe of this tasty, steely new single is heavier and moodier than Jack’s previous tunes - even if his voice is still sweet like a whiskey-laced cocktail of the Black Crowes and Blackberry Smoke. Like what you hear? Check out more forthcoming album, Who Feeds The Wolf?, which is out in October.

Junkyard Drive - They Don't Care About Us

The artwork features a fist held aloft; not a bad summation, we reckon, of the stabbing, raging axe-work and straight-ahead aggression going on here. Billed with potential contentiousness as a tribute to Michael Jackson, it’s a more-ish fistfull of hard rock that sticks it to The Man (and others) with gusto.

A sombre change of tone now, courtesy of the new song from grungy, heavy Texans Blacktop Mojo. It’s earnest, brow-furrowed stuff but they do it very well, and the grave-filling finish of the video is pleasingly sinister. Check out this and more on their third album, Under The Sun.

Next we’ve got a song called Young Guns by actual young guns (aka Manchester rockers Gorilla Riot). Dirtier than a bunch of metalheads post-Download (pre-shower), it’s slow, swaggering bluesy rock’n’roll with lashings of southern rock warmth to cut through the grease. Nice.

A track so old Tarja Turunen can't remember when she started writing it, Railroads features the kind of thing we've come to expect from the former Nightwisher: sweeping orchestral pop, cinematic in scale with a hard rock edge, and that voice. She might not be everyone's cup of koskenkorva, but Railroads has craft, it has ambition, and it has wings.