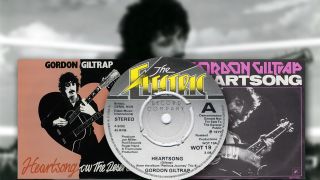 Gordon Giltrap’s sole hit single was an instrumental, which was featured on the album Perilous Journey. It got Giltrap an appearance on Top Of The Pops on February 2, 1978, alongside ELO, Brotherhood Of Man and Lulu. It also became the theme for the BBC show Holiday.

Where did the inspiration for Heartsong come from?

“It began with a song I did in the late 60s called Starting All Over. When I lived in London, I began to mess around with it, and stumbled on the riff for what would become Heartsong. I kept working on it, and eventually recorded the guitar part for it. Then we added the rhythm section from Simon Phillips (drums) and John G. Perry (bass). At the time, I never thought of this as anything other than a jolly little tune, but my producers Rod Edwards and Rodger Hand realised the commercial potential in what we had. The melody really came out when the mini moog part was added, and then Eddie Spence came up with the fast moving synth figure. Edwards and Hand recorded Eddie at half speed, then played it back at normal speed to get the desired effect. That was something they learnt from George Martin.”

“Well, when the label said they were going to release it as a single, I never expected it to do anything. But it became so popular that I still play it even now, and it gets a massive reaction.”

“For a short time, yes. I had to start taking it seriously as a single when the label told me it was selling 20,000 copies a day. And I even did Top Of The Pops. That felt odd, being on with all these pop stars of the day. I remember thinking, ‘I’m a rock musician, what am I doing here?’. But it was nice while it lasted. The problem was that everyone thought I had an idyllic pop star life at the time, when the reality was I was going through hellish times at home, with the woman I lived with.”

“It was all very short lived. My mistake was in trying to follow up Heartsong with a cover of Fleetwood Mac’s Oh Well. I should have done something similar to the former. But once it was all over, I went back to being a serious musician.”