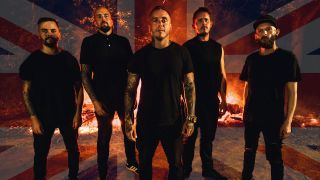 Viscera, the crushingly brutal new death metal project from ex-Sylosis/Heart of a Coward vocalist Jamie Graham and former members of Martyr Defiled and Abhorrent Decimation have just dropped their first ever music video for appropriately savage titled Lamb to the Slaughter, taken from their forthcoming debut album, due for release next year.

Graham comments:  "We are hugely excited to finally be able to show you guys Lamb to the Slaughter - the first track lifted from our debut album which we're finishing up right now... we're prepping for an album release in Q1 of 2020 and have some awesome guests featuring on the record!

"Our friend Mike Valeri from Brand Of Sacrifice is handling the mix and master. Artwork is being handled by Shindy Reehal (Ingested, Harbinger)."

Check out the video premiered below:

To celebrate the merciless release from the technical death metal powerhouse, the band chatted to Hammer about their UK-based contemporaries and picked their top death-influenced acts, hailing from old Blighty, that are destined for greater things.

"If you’re into death metal and haven’t heard of Ingested, you’ve probably been living under a rock…these guys are one of the hardest working bands in the genre. The world are slowly starting to notice these boys and rightly so.

"The perfect marriage of classic brutal death/slam and deathcore. Also complete sweethearts, but don’t let them anywhere near your beer if you ever want to make it out alive."

"The undisputed Kings of Scotland. These guys definitely fall more into the Metal/Thrash brackets but the (Swedish Melo-Death) Death Metal influence is also undeniable.

"I’ve just heard some sneaky demos of their new shit and they’re setting the bar now. Their live show is second to none - I pity the bands that have to go on after them."

"Along with Bleed From Within, these lads are probably the UK’s best chance at a Death Metal act gaining worldwide mainstream success. The songs these guys write are just so immediate and catchy- yet at the same time heavy as balls.

"The dual vocal attack combined with simple, meticulously executed sledgehammer riffs is a joy to behold live. I think 2020 will be their year. They’re out in the USA right now with Fit For An Autopsy and killing it."

"Venom Prison have been flying the flag for the Welsh scene and leaving numerous cadavers in their wake with their insane live shows!

"Absolutely savage and very professional to boot. I’m confident these guys will have a massive 2020. Their singer Larissa is a force of nature onstage."

"I honestly haven’t seen a heavier live band come out of the UK in recent years. Their frontman Roper is a monster onstage, despite being a total sweetheart of a hippy in person!

"Got so much time for these lads as their work ethic is second to none, as is their professionalism. Some God tier deathcore right here, people."

"These guys have been at the very forefront of the Tech Death scene in the UK for years now and its easy to see why. Their sound was actually way ahead of the curve when they first appeared – imagine Born of Osiris deciding they want to play Hate Eternal songs and you’re sorta there."

"These Glasgow lads have started causing some ripples across the UK after the release of their new record All Flesh is Grass. Their tunes are super dense and claustrophobic, with awesome use of synths and black metal influences.

"This sort of style of death metal is hard to execute properly without disappearing up your own arse, so fair play to these lads for creating an immediately engaging record in the style."

"Essential UK deathcore. These guys don’t play live much- but when they do, my God. Total carnage!

"Jack Simmons is a talented dude, who also plays in Slaughter to Prevail. Singer Luke Griffin is one of the main staples of the sub genre now, with his guttural vocals becoming notorious.

"To be honest I think if they toured more they’d be huge."

"Again, not death metal per se, rather equal parts death, stoner, doom and deathcore… but these guys are lighting serious fires up every arse imaginable at the moment and justifiably so!

"There’s a raw energy to them that reminds me of Neurosis. Another incredible live band that will definitely be moving up the ladder quickly in the next year or two."

"These guys fall into the Down Tempo/Deathcore genres more, but are worth a mention in this list purely for their sheer raw heaviness. Ben Mason (vocalist) is one of the ones to watch out for in the next few years… the man sounds like a Gorilla raping a Bear. Utterly terrifying.

"If you like your breakdowns super low and super slow, these guys are a wet dream. The Hand of Violence is an album I keep coming back to at the gym."