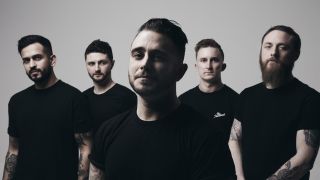 After splitting with Jamie Graham back in 2017, Heart Of A Coward had some big boots to fill with a new vocalist. In stepped long-time friend, Kaan Tasan, who was introduced to fans in March 2018 with single Collapse.

But, it's been over a year since then, and HOAC have finally dropped the follow up to 2015's Deliverance, releasing new record The Disconnect last month.

To celebrate Kaan's first album with the band, we thought we'd ease him into his new role by sitting down with him not to talk about the new record, but to chat about one of his, and the rest of the band's, favourite bands: the mighty Deftones.

Having been a fan since his early teens, Kaan graciously obliged and handed us a run down of his top ten Deftones tunes.

"This track reminds me of skating and summer, just the vibe behind it, it's just such a melodic but heavy hitting track. It's a great tune."

"I first got into Deftones on their Adrenaline album and this track is just so raw and I just love it!

"You can't understand a word that Chino [Moreno, vocalist] says in one section, and that kinda makes it even better [laughs] which is just funny."

"Very close to one of my favourites. A big tune, just again all the vibes, they just create this amazing sound about it, about what they do."

"A song that takes you on a real musical journey, it starts off at one place and goes all over the shop. It's quite a long track, but it's definitely a favourite."

"Maynard [Keenan of Tool] features on this, which is just another incredible song. I saw Deftones play Electric Ballroom, I think, they did a secret show before Saturday Night Wrist was released – it was quite a few years ago now, but that was the first time I saw them play Passenger live and Chino sang both parts – it was just awe-inspiring, it was an absolutely amazing moment.

"I'm a massive Tool fan, I'm into A Perfect Circle as well, but A Perfect Circle, for me, came after Tool. I think Tool is where my ear sits. Both bands are amazing and they are incredible live.

"I literally can't wait for Download to see Tool perform again, last time I saw them was 2006 – at Download – and that was a special year. Deftones played that year as well."

"Deftones have this breadth of music that can go from super melodic, spacey, like beautiful parts of music to like  heavy, repetitive riffs and Sextape is definitely one of their more melodic sides."

"Another one of their riff based absolute bangers. Just creating a vibe with a heavy riff."

"It's another one that takes me back to an era of sunshine and skating and general kinda youth, I guess.

"I was an in-liner, I mean I skateboarded a little bit, but I was an in-liner. I think the technical term in the early 2000s was an "aggressive inliner" and that couldn't be more horrendously cheesy... I snowboard now, more than anything. I kinda left all that behind to go up a mountain!"

Most Outstanding Deftones song: Be Quiet and Drive (Around The Fur, 1997)

"It's the peak of Deftones, that sound. They just create this vibe within their songs that I absolutely love and for me, that's the one track I can put on and it just makes the world disappear to an extent.

"Deftones are one of those bands for me where I can put on an album or a track and it kinda takes you back to a certain time or place. I suppose that happens when you grow up with a band."

Heart Of A Coward’s new album The Disconnect is out now via Arising Empire Records, available to order HERE. They will be playing Download Festival on June 16 and Radar Festival on August 2.