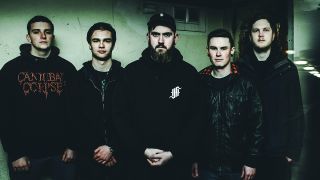 “We’ll obsess over which note needs to come next, but when we bring a song to the practice room to be fleshed out, it’s an organic process,” says Harbringer frontman Tom Gardner of their penchant for the techy stuff.

“We’ll all nerd out a bit when it comes to gear and our respective instruments, though; I feel that’s part and parcel of playing technical music. Technicality and technology go hand-in-hand!”

“The tech-metal scene is by far the strongest community in UK metal,” says Tom. “It’s so self-aware and the members are committed to keeping the community active, involved and engaged. It’s awesome to see it spreading worldwide.”

SOUNDS LIKE: Cutting edge tech-metal imbued with the spirit of Chuck Schuldiner

FOR FANS OF: Death, Periphery, The Faceless

LISTEN TO: A Fractured World

Harbinger's new album Compelled to Suffer is out now.